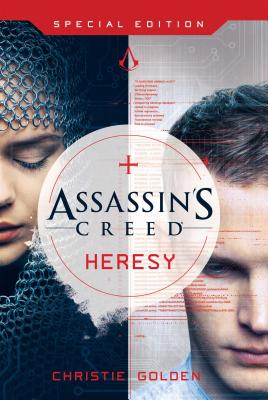 Winner of a Scribe Award 2017. From New York Times bestselling author Christie Golden comes an original story set in the universe of Assassin’s Creed.  Reliving the memories of his ancestor who fought beside Joan of Arc, high-ranking Templar Simon Hathaway slowly uncovers secrets of the past that could dangerously impact his present…and that of the entire Templar order.

This premium hardcover edition features exclusive art sketches and behind the scenes interviews, as well as a special code to unlock Assassin's Creed rewards through Ubisoft Club's loyalty program.

An endless conflict.  An old wrong.  A new revelation.

But Simon also has an insatiable curiosity, and is fascinated by the thought of experiencing history first-hand through his ancestor--Gabriel Laxart, who fought alongside the legendary Joan of Arc.

When he enters the newly-designed Animus for its initial project, Simon finds himself unprepared for what he discovers: How deep the conflict between the Templars and the Assassins goes. What Gabriel will do for the woman he both loves and reveres.

And the most dangerous truth of all: Who is the heretic…and who is the true believer.

"Golden’s new book is such a treat."
— The Retroist

"With its blend of science-fiction, action and historical element, this will intrigue many."
— Parkersburg News & Sentinel

There is plenty of intrigue, lore, and drama that made for an exciting read.
— SciFiChick

Gamers often enjoy the Assassin’s Creed series’ action-packed gameplay but spend little time exploring the lore behind it. New York Times bestselling author Christie Golden has created an incentive to change that; her new novel, Assassin’s Creed Heresy, recounts a thrilling, adventurous story that uniquely expands on the franchise’s universe and will leave both longtime fans and newcomers wanting more.
— The Missourian