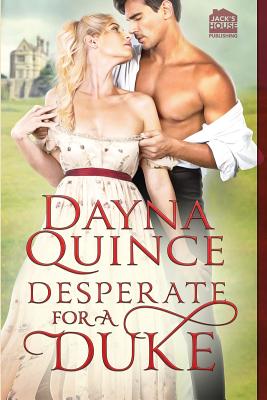 Desperate for a Duke

When only a Duke will do...

When her father resorts to suicide to escape his gambling debts, Heather Everly is heartbroken. But her sorrow turns to terror when she discovers that his last losing bet was her hand in marriage to the scoundrel Lord Brightly. The blackmailing nobleman threatens to ruin Heather and her sisters by revealing their father's cause of death to Society--unless Heather marries him. Desperate, she knows she must marry a man with enough wealth and status to silence the evil Lord Brightly and save her family from ruin.

The elderly Duke of Ablehill is believed to be Heather's best opportunity for a speedy marriage to a powerful man. But when she attends a house party hoping to meet the duke, she finds he is injured and has sent his secretary, Mr. Calder, in his stead to determine if Heather would make a suitable wife for the duke.

Heather is instantly drawn to the handsome secretary and begins to entertain the possibility of an indiscretion with Calder before she sacrifices herself for her family and enters into a loveless marriage with a man old enough to be her grandfather.

With deceptions swirling, Lord Brightly conniving and the clock ticking, Heather's prospects seem bleak. The only bright spot in her otherwise dreadful existence is the delightful Mr. Calder. The more time she spends with him, the less interested she is in the duke--or the prospect of marriage to anyone who isn't her beloved Mr. Calder.

Faced with dire choices, Heather must either risk everything for a man who makes her heart race with desire but can't help her or her family, or do what's expected of her and sacrifice her only chance at true happiness.