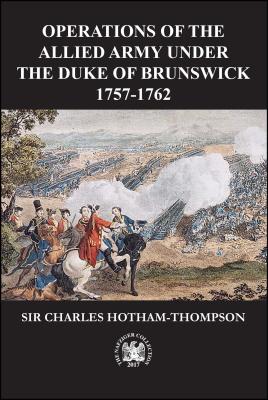 Operations of the Allied Army Under the Duke of Brunswick (Paperback)

This work was originally published in 1764 and is a detailed account of all operations, actions, and maneuvers.

This work was originally published in 1764 and its author was a British officer who served with the Duke of Brunswick against the French as they moved north from the Rhine to push into Hanover.  It is a detailed account of all operations, actions, and maneuvers.  Seven battles are covered in detail and supported by maps.  The original work has been modified to make following it on modern maps by correcting the spellings of German city names to their modern spellings, or, when they have been absorbed into larger cities that has been annotated.  In addition, biographies of several of the Duke of Brunswick’s staff officers have been added.  In the original form the author was anonymous, but he has been identified and his biography also included. Originally published as part of George Nafziger's Collection

He was the eldest son of Sir Beaumont Hotham, 7th Bt., of Beverley, in the East Riding of Yorkshire. He was educated at Westminster School (1741–5) and studied law at the Middle Temple (1742). He was commissioned into the Army as an ensign in the 1st Foot Guards in 1746.

He served with regiment in Flanders, where he took part in the Battle of Lauffeld in 1747 and was appointed aide-de-camp to the Earl of Albemarle, commander of the British forces in the Low Countries. During the Seven Years' War (1754–63) he was firstly aide-de-camp to Lord Ligonier and then adjutant to the British forces fighting on the continent. He was promoted to colonel in 1762 and given the colonelcy of the 63rd (West Suffolk) Regiment of Foot in 1765.
or
Buy Here
Copyright © 2020 American Booksellers Association