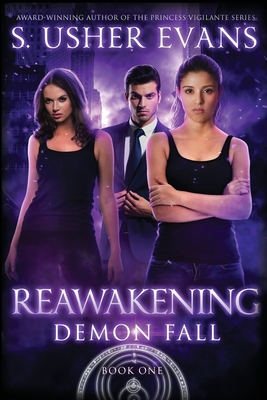 From award-winning author S. Usher Evans comes a smashing continuation of her bestselling urban fantasy series. Picking up six months after the end of Redemption, the final book in the Demon Spring trilogy, Reawakening will leave readers guessing alongside our main characters as they explore the new reality of demons and humans.

Demons still walk amongst us, but ever since Bael, king of the demons, was killed in the Great Demon War, things have been a little topsy-turvy for demon hunters Jack Grenard and Cam Macarro. Jack, alongside the now-human Anya, has been living a semi-retired life in Seattle, moonlighting as a vigilante demon hunter. But Anya continues to spiral, unsure what to make of her life now that Bael is no longer controlling it.

Across the Pacific, Cam Macarro balances her job as the Director for Weapons Development for the International Coalition for Demon Management while secretly dating Lotan, the prince of the wolf-shifting nox demons. Lotan wants to take things to the next level, but Cam is dragging her feet--that is, until Lotan is mysteriously kidnapped by forces unknown.

Cam recruits Jack and Anya to help bring Lotan back, but the odds are stacked against them in an increasingly dangerous demonic world. But when Anya hears a rumor she might be able to reclaim her former glory, she sets the three of them on a world-spanning adventure that will keep readers guessing until the very end.

Reawakening is the first book in the brand-new Demon Fall trilogy, a spin-off series in the Demon Spring universe. It is strongly recommended that readers begin with the Demon Spring series prior to starting this one.