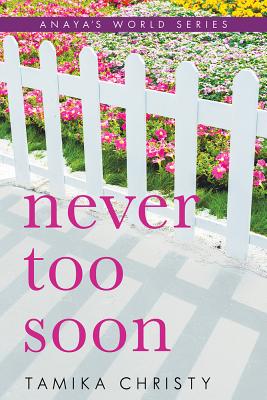 Book 2 in the "Anaya's World" series.

Things are looking up for Anaya Goode after the deaths of her brother and mother. She is the youngest (and highest paid) executive in Alameda County. She is in an adoring relationship with the love of her life, her natural twists are on point, and she runs a six-minute mile. What else matters?

When Anaya is tasked with leading negotiations for the most significant development agreement in County history, her world unravels. If the antics of inept officials and her micromanaging boss aren't enough to drive Anaya mad, she discovers that her ex-boyfriend Jeff is commissioned as a consultant on the development agreement. Anaya hasn't had contact with Jeff since their messy break-up six years ago.

As negotiations for the development agreement intensify, an internal scandal threatens Anaya's reputation—and her job. Amid bureaucratic indecision and public outrage, Anaya leans on Jeff for support, and unresolved feelings resurface.

As Anaya questions her steady relationship, her extended family's perception of her as Goode matriarch puts her in the middle of every aunt's and cousin's problem. She is tired of serving as supplemental income to her scripture-quoting, ever-pregnant sister, and would love to burn the imaginary pedestal her family has perched her on. Can she see her work and family commitments through and still maintain her love life---and more importantly, her sense of self?

Ripe with witty dialogue and relatable characters, Never Too Soon offers a look into complicated relationships and haunting pasts, and shows the importance of the familial ties that bind.

"Christy’s prose is consistently approachable and never heavy, even when the subject matter is. Readers who appreciate light fiction with an affable, witty, and determined female protagonist will appreciate this book. A feel-good novel that ably tackles big dramas." —Kirkus Reviews

A Bay Area native, Tamika Christy began writing at an early age, prompted by the gift of a journal. She continued writing throughout college where she realized her talent for creating intriguing plots and multidimensional characters. Using words to paint vivid landscapes of the emotions, triumphs, and the madness of life, Tamika continued to nurture her love for writing while attending law school, where she gave birth to her first novel Any Time Soon, which won the Next Generation Finalist Award for African American Fiction.

Now a practicing attorney, Tamika still devotes time to her love of writing. She describes her writing as urban prose—funny, warm, and soulful with blunt dialogue and familiar realism.