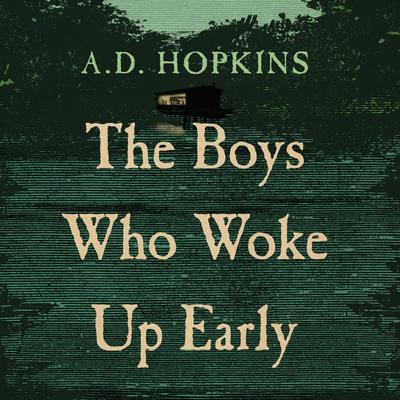 The Boys Who Woke Up Early (Digital Audiobook)

Playing cops was just a game until the bullets were real.


The gravy train hasn’t stopped in the hollers of western Virginia for more than thirty years when Stony Shelor starts his junior year at Jubal Early High. Class divides and racism are still the hardened norms as the Eisenhower years draw to a close. Violence lies coiled under the calm surface, ready to strike at any time.


On the high school front, the cool boys are taking their wardrobe and music cues from hip TV private dick Peter Gunn, and Dobie Gillis is teaching them how to hit on pretty girls. There’s no help for Stony on the horizon, though. Mary Lou Martin is the girl of his dreams, and she hardly knows Stony exists. In addition, Stony can’t seem to stay out of juvenile court and just may end up in reform school. A long, difficult year stretches out in front of him when a new boy arrives in town. Likeable bullshit artist Jack Newcomb dresses like Peter Gunn, uses moves like Dobie Gillis, and plays pretty good jazz clarinet.


Jack draws Stony into his fantasy of being a private detective, and the two boys start hanging around the county sheriff’s office. Accepted as sources of amusement and free labor, the aspiring gumshoes land their first case after the district attorney’s house is burglarized. Later, the boys hatch an ingenious scheme to help the deputies raid an illegal speakeasy and brothel. All the intrigue feels like fun and games to Jack and Stony until a gunfight with a hillbilly boy almost gets them killed. The stakes rise even higher when the boys find themselves facing off against the Ku Klux Klan.

A.D. HOPKINS has worked for newspapers in Virginia, North Carolina, and Las Vegas, Nevada, where he was inducted into the Nevada Press Association's Newspaper Hall of Fame. He is the author of The First 100: Portraits of the Men and Women Who Shaped Las Vegas. A former fencing teacher and inner city Scoutmaster, he restored a 1972 Ford Bronco, which he says was easier than the other two hobbies. The Boys Who Woke Up Early is his first novel. Hopkins lives in Las Vegas, Nevada.