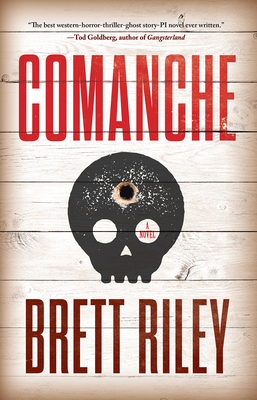 "Brett Riley's COMANCHE is the best western-horror-thriller-ghost story-PI novel ever written.--Tod Goldberg, author of Gangsterland Like a cylinder in a six-shooter, what goes around, comes around. In 1887 near the tiny Texas town of Comanche, a posse finally ends the murderous career of The Piney Woods Kid in a hail of bullets. Still in the grip of blood-lust, the vigilantes hack the Kid's corpse to bits in the dead house behind the train depot. The people of Comanche rejoice. Justice has been done. A long bloody chapter in the town's history is over. The year is now 2016. Comanche police are stymied by a double murder at the train depot. Witnesses swear the killer was dressed like an old-time gunslinger. Rumors fly that it's the ghost of The Piney Woods Kid, back to wreak revenge on the descendants of the vigilantes who killed him. Help arrives in the form of a team of investigators from New Orleans. Shunned by the local community and haunted by their own pasts, they're nonetheless determined to unravel the mystery. They follow the evidence and soon find themselves in the crosshairs of the killer.