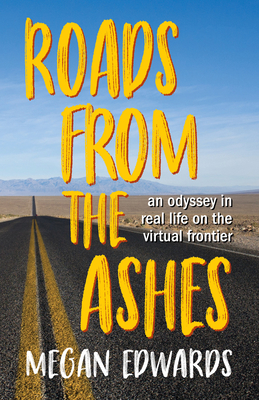 Roads from the Ashes

An Odyssey in Real Life on the Virtual Frontier

When a wildfire destroyed her home and worldly possessions in the hills above Los Angeles, it didn't take Megan Edwards long to recognize an opportunity. It took her husband a little longer ("Give me five minutes to grieve "), but they were both soon planning to make the most of their sudden "stufflessness" and hit the road. They did so a few months later in a freshly built four-wheel-drive motorhome that was even more unusual because of the office in the back instead of a bedroom. This all happened back when "Internet" had not yet entered the lexicon but "email" had. The mobile office would allow Edwards to file stories with the newspapers she wrote for by cell phone. That was the idea, at least. At the beginning of 1994, cell service was patchy, unreliable, and expensive.

They also thought they'd be traveling for six months or so, when, they believed, they'd settle down and get back to normal. But five years and thousands of miles later, they were still on the road. In that time, they'd watched the Internet grow from a mysterious fad prized by people in remote locales into an unstoppable universal phenomenon. They started a website, RoadTripAmerica.com, to share road tripping tips and ideas. Slowly, their dream of being "at work, at home, and on the road, all at the same grand time" became a reality.

This edition marks the twentieth anniversary of Edwards's memoir, which was first released in 1999. At its heart a story of making lemonade when life gives you lemons, this memoir is also a riveting and at times hilarious look at the early years of the World Wide Web. With a new introduction by the author and a foreword by Chris Epting, enjoy an armchair adventure across North America when the Internet was young. This edition also includes 22 photos dating from when the author lived on the road.

Megan Edwards is the award-winning author of FULL SERVICE BLONDE, GETTING OFF ON FRANK SINATRA, and STRINGS: A LOVE STORY. All three novels were first-place winners of Benjamin Franklin book awards in 2018. She also won the Silver 2019 IPPY Award for FULL SERVICE BLONDE. Edwards is also the author of ROADS FROM THE ASHES: AN ODYSSEY IN REAL LIFE ON THE VIRTUAL FRONTIER, a memoir of her five-year adventure living and working on the road during the dawn of the Internet. At home in Las Vegas, Nevada, where there's never a shortage of fascinating material and inspiration, Edwards is working on her next novel.
Loading...
or support indie stores by buying on