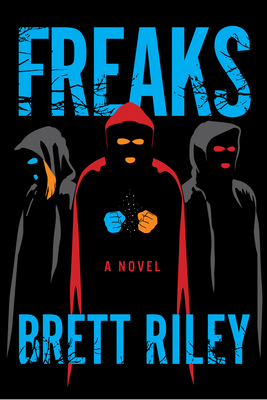 Hunted by monsters. Wanted for questioning. Late for class. Four high-school friends suffer daily humiliation at the hands of three bullies. When the friends accidentally open a portal to another dimension, they unintentionally allow terrifying, other-worldly creatures to invade their small Arkansas town. Discovering that they are now endowed with strange superpowers, the four teens dub themselves "Freaks," the very name their tormentors used to ridicule them. The Freaks must fight to save the lives of family and friends now in mortal peril and thwart a secret government task force that appears to be hunting them.

Brett Riley is a professor of English at the College of Southern Nevada. He grew up in southeastern Arkansas and earned his Ph.D. in contemporary American fiction and film at Louisiana State University. His short fiction has appeared in numerous publications including Folio, The Wisconsin Review, and The Baltimore Review. Riley's debut novel, Comanche, was released in September 2020, and Lord of Order was published in April 2021. Riley is currently finishing Rubicons, the third book in the Freaks Superhero series. The second book of the Freaks series, Travelers, will be in stores and online in August 2022. He has also won numerous awards for screen writing. He lives in Henderson, Nevada.
Loading...
or support indie stores by buying on