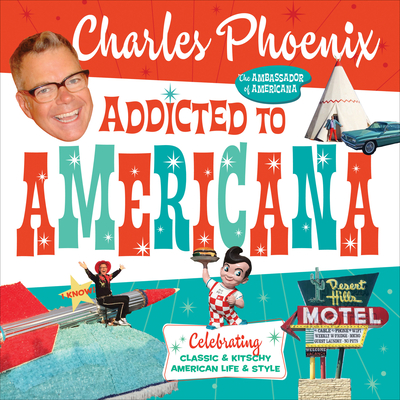 An adventure through the classic, the vintage, the kitsch, the nostalgic, and the fun of Americana culture guided by showman Charles Phoenix.

"Addicted to Americana...unfurls the most colorful, most creative, and most interesting facets of mid-twentieth century American culture in a joyful, exuberant way only Charles Phoenix] can convey."
-- Bleep Mag

Raised on a used-car lot, Charles Phoenix was destined to become the Ambassador of Americana. The photo collector, food crafter, and field tripper is famed for his hilarious live show performances and theme park tour of downtown Los Angeles. This riotously colorful book, replete with Charles's collection of vintage Kodachrome slides, celebrates his lifelong quest to unearth the best of classic and kitschy American life and style.

Known as the Ambassador of Americana, Charles Phoenix is a showman, tour guide, food crafter, and author known for his live comedy slide-show performances, madcap test-kitchen videos, "field trip" adventure tours, and colorful books, all celebrating classic and kitschy American life and style. He has appeared on such TV shows as Martha Stewart, The Queen Latifah Show and Cake Wars (a recurring judge), has been profiled in such newspapers as The Washington Post and the Los Angeles Times, and been a guest on such radio shows as NPR's The Splendid Table and NPR/KPCC's Take Two.
Loading...
or support indie stores by buying on