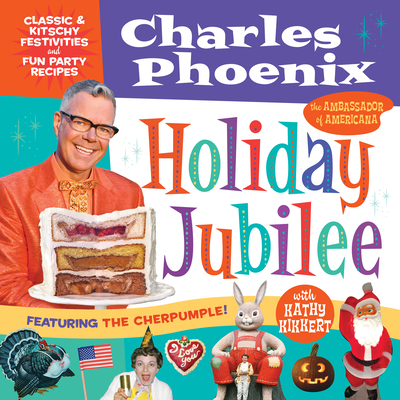 You're invited to celebrate America's favorite seasonal traditions like never before. Ambassador of Americana Charles Phoenix mixes and mingles spectacular vintage Kodachrome slides of New Year's, Valentine's Day, Easter, Fourth of July, Halloween, Thanksgiving, and Christmas with his eye-popping, original recipes for epic edible centerpieces and party pleasers from his colorful Test Kitchen--including his legendary Cherpumple creation Be prepared for your imagination to be inspired and your holiday spirit to soar.

Known as the Ambassador of Americana, Charles Phoenix is a showman, tour guide, food crafter, and author known for his live comedy slide-show performances, madcap test-kitchen videos, adventure tours, and colorful books, all celebrating classic and kitschy American life and style. He has appeared on such TV shows as Martha Stewart, The Queen Latifah Show and Cake Wars (a recurring judge), has been profiled in such newspapers as The Washington Post and the Los Angeles Times, and been a guest on such radio shows as NPR's The Splendid Table and NPR/KPCC's Take Two.
Loading...
or support indie stores by buying on