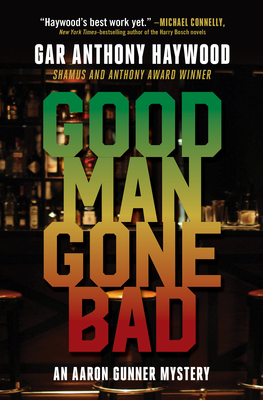 Hard times are nothing new for private investigator Aaron Gunner. Working on the mean streets of South Central Los Angeles, he's seen more than his fair share of trouble. But when his cousin and confidante Del Curry commits suicide after allegedly killing his wife and critically injuring their daughter Zina, Gunner knows he's about to face the hardest times of all. He doesn't buy the LAPD's version of the shooting and isn't going to wait for Zina to regain consciousness to disprove it. Whatever drove Del to take his own life---and possibly assault his wife and daughter---Gunner's going to find it, even if it means learning things about his late cousin he'll wish he never knew. But first, he has a paying case to work, proving the innocence of an Afghan War veteran accused of murder. Plagued by seering migraines and occasional fits of rage, Harper Stowe III is counting on Gunner to fill the holes in his ruined memory that make him the perfect suspect in the killing of his former employer. With a new era of American racism and divided politics on the rise all around him, Gunner must seek the truth behind two fatal shootings now, and grieve for his beloved cousin later.

Gar Anthony Haywood is the Shamus and Anthony award-winning author of twelve crime novels, including the Aaron Gunner private eye series and Joe and Dottie Loudermilk mysteries. His short fiction has been included in the Best American Mystery Stories anthologies, and Booklist has called him a writer who has always belonged in the upper echelon of American crime fiction. Haywood has written for network television and both the New York and Los Angeles Times.
Loading...
or support indie stores by buying on