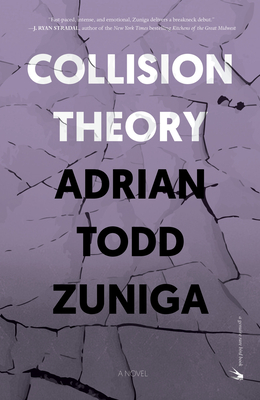 St. Louis Post-Dispatch Bestseller
Finalist for the Foreword INDIES 2018 Award for Best Fiction Thomas Mullen is struggling. Everything for him feels at risk, spiked with threat, since he witnessed a woman jump to her death fifteen months ago. Now there are the pleading calls from his parents to come home, please come home. But it is not until his best friend shows up unannounced that Thomas is awakened. He soon finds himself on an unpredictable journey in which he is forced to confront difficult truths: girlfriend's leave, mother's fall ill, and attempts to deny pain will ultimately fail. A dazzling debut from Literary Death Match creator Adrian Todd Zuniga, Collision Theory is a headlong and heartaching modern masterwork. It's suddenness, unexpectedness, humor, and humanity make for an unforgettable read.

Adrian Todd Zuniga is the host and creator of Literary Death Match (now featured in over 60 cities worldwide). He hosts LDM Book Report on YouTube, and is the co-writer of Madden NFL 18's interactive movie Longshot (EA Sports), which earned a nomination for a Writers Guild of America award in 2018. An award-winning journalist, he now focuses on fiction and screenwriting. He lives between London and Los Angeles.
Loading...
or support indie stores by buying on