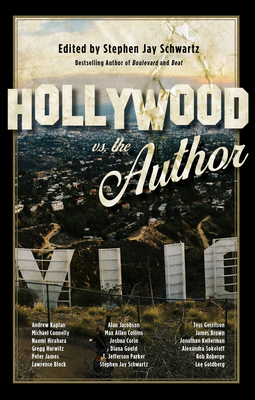 Hollywood vs. the Author

It's no secret that authors have a love-hate relationship with Hollywood. The oft-repeated clich that "the book was better than the movie" holds true for more reasons than the average reader will ever know. When asked about selling their book rights to Hollywood authors like to joke that they drive their manuscripts to the border of Arizona and California and toss them over the fence, driving back the way they came at breakneck speed. This is probably because Hollywood just doesn't "get it." Its vision for the film or TV series rarely seems to match the vision of the author. And for those rare individuals who've had the fortune of sitting across the desk from one of the myriad, interchangeable development execs praising the brilliance of their work while ticking off a never-ending list of notes for the rewrite, the pros of pitching their work to Hollywood rarely outweigh the cons. Stephen Jay Schwartz has sat on both sides of that desk--first as the Director of Development for film director Wolfgang Petersen, then as a screenwriter and author pitching his work to the film and television industry. He's seen all sides of what is known in this small community as "Development Hell." The process is both amusing and heartbreaking. Most authors whose work contains a modicum of commercial potential eventually find themselves in "the room" taking a shot at seeing their creations re-visualized by agents, producers or development executives. What they often discover is that their audience is younger and less worldly as themselves. What passes for "story notes" is often a mishmash of vaguely connected ideas intended to put the producer's personal stamp on the project. Hollywood Versus The Author is a collection of non-fiction anecdotes by authors who've had the pleasure of experiencing the development room firsthand--some who have successfully managed to straddle the two worlds, seeing their works morph into the kinds of feature films and TV shows that make them proud, and others who stepped blindsided into that room after selling their first or second novels. All the stories in this collection illustrate the great divide between the world of literature and the big or small screen. They underscore the insanity of every crazy thing you've ever heard about Hollywood. For insiders and outsiders alike, Hollywood Versus The Author delivers the goods. With contributions by Michael Connelly, Lawrence Block, Max Allan Collins, Alan Jacobson, Andrew Kaplan, Tess Gerritsen, James Brown, Peter James, Rob Roberge, Lee Goldberg, Naomi Hirahara, T. Jefferson Parker, Diana Gould, Joshua Corin, and Alexandra Sokoloff

Los Angeles Times Bestselling Author Stephen Jay Schwartz spent a number of years as the Director of Development for Wolfgang Petersen (Das Boot, In the Line of Fire, Air Force One, Troy, The Perfect Storm) where he worked to develop screenplays for production. He also worked as a freelance screenwriter before writing his two novels, Boulevard and Beat, which follow the journey of sex-addicted LAPD detective Hayden Glass. The Hayden Glass series was optioned by producer Ben Silverman (Ugly Betty, The Office, The Tudors) for development as a TV series. Stephen's short fiction was most recently included in the collection The Los Angeles Fiction Anthology alongside T.C. Boyle, published by Red Hen Press, as well as the short story collection Jewish Noir, published by PM Press. He is a regular moderator at the Los Angeles Times Festival of Books and has judged and been the panel chair for the Los Angeles Times Book Prize in the mystery/thriller category since 2015. His film work has been exhibited in the A.F.I. Los Angeles International Film Festival and the Metropolitan Museum of Art, NYC. He is currently writing his third novel, a standalone mystery/thriller. Stephen received his MFA in Creative Writing from UC Riverside and is currently on faculty at Emerson College Los Angeles.
Loading...
or support indie stores by buying on