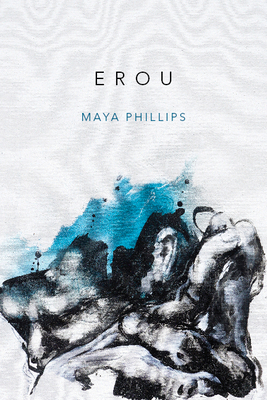 Maya Phillips’ stunning debut collection Erou borrows the framework of the traditional Greek epic to interrogate the inner workings of a present-day nuclear family and the role of a patriarch whose life, marriage, and death are imagined as a sort of hero’s journey. Her poems move seamlessly between the worlds of the living and the dead, between myth and reality in a journey that raises its own Homeric question: What is home and how do we locate our place within that home? These are poems of passion and compassion in their reconciliation with what cannot be changed—but can be understood—by those who have been left behind.

“Here’s a line that’s stuck in my head since reading this remarkable debut: ‘Fathered by rumor, raised / by ghost.’ It echoes the sound, subject, and sensibility of Erou. These engrossing poems bind family and myth, intimacy and allegory, ‘Gap-toothed Erou’ and ‘Erou of the forked tongue.’ The poetry of Maya Phillips is full of unforgettable imagery, word play and candor. She writes with a clarity that can cut as quickly as it calms.” —Terrance Hayes

“The hero’s journey has never been more engaging in contemporary poetry than in Erou by Maya Phillips. Traveling between the mythical and the hyper-real, these poems make sense of a world that’s stranger than fiction and give us permission to question why our days feel like a fable. Phillips navigates between the struggles of family and the complications of love, and the quotidian challenges we must navigate in the world. With the keen eye of Robert Hayden and the lyric range of June Jordan, Maya Phillips has stepped forward with a collection of poems that’s an Odyssey for the 21st century.” —A. Van Jordan

“Maya Phillips’ debut opens with an erasure of a passage from Homer’s Odyssey, and in doing so the classic epic of war and a long return home is reclaimed as our hero—the so-named Erou—her father, MTA worker and ‘of the School of Can’t Tell Me Nothing’ and connoisseur ‘of bacon grease and buttered cornbread’—is ferried across the River Styx at the young age of 51. These spare poems quiver with grief, but they are no mere elegies. No, they are exorcisms for the father’s infidelities and outbursts, they are conjurings of his ghost as it wonders the subways and bears witness to his own autopsy. Here, you have the strange finesse of Anne Carson but hammered by the hard knocks of the city and our modern times. ‘In another age,’ Philips writes, ‘we’d have been gods, but here // we are in our mortgaged homes, rented apartments, / in our leased cars, in our morning commutes.’ What issues forth is a most courageous tenderness, the kind that acknowledges the sins of the father but with compassion as the dead remember ‘all of it, and it hurts.’ If Phillips inquiry made by the poem titled ‘After His Death Will My Father Be Beautiful’ could be answered by the creation of this book, the answer would be a resounding yes.” —Nickole Brown

"To the brimming coffers of testimonials about the heart, Maya Phillips adds her fierce poem — a Father’s Day card with a twist. The heart that powered this father to his mortal conclusion has been the source of his charm as well as the driving force behind his all-too-human paternal shortcomings. An examination of the defective organ yields no easy platitudes about love. The verdict? Forgiveness and, finally, understanding — perhaps the most caring gifts a daughter has to offer. In the end, aren’t we all listening hard so we can find the beat on a crowded dance floor?" -- Rita Dove
— Rita Dove's poetry column

"In Phillips’s scintillating debut, domestic turmoil is transformed into Greek mythology as fate and bloodline frame the legend of her life’s tragic hero: her dead father...."
— Publishers Weekly

One of the featured ten debut poets published in 2019.
— Dana Isokawa

"A literary star makes a debut....With grace and grandeur, a life is transformed, off-beat, irreverent, loving. Grief remembers everything but never before so originally unfolded. This is life beyond life..."
— Grace Cavalieri

Maya Phillips, born and raised in New York, is the author of the debut poetry collection Erou, published by Four Way Books in 2019, and the recipient of a Hodder Grant from Princeton’s Lewis Center for the Arts. Her second book, NERD: On Navigating Heroes, Magic, and Fandom in the 21st Century, is forthcoming in summer 2022 from Atria Books. Maya received her MFA in poetry from Warren Wilson’s MFA Program for Writers and her BFA from Emerson College. Her poetry has appeared in At Length, BOAAT, The Gettysburg Review, Ghost Proposal, Hayden’s Ferry Review, Vinyl, and more, and her arts & entertainment journalism has appeared in The New York Times, Vulture, Slate, Mashable, American Theatre, and more. Maya currently works at The New York Times and as a freelance writer. She lives in Brooklyn.
Loading...
or support indie stores by buying on
(This book is on backorder)