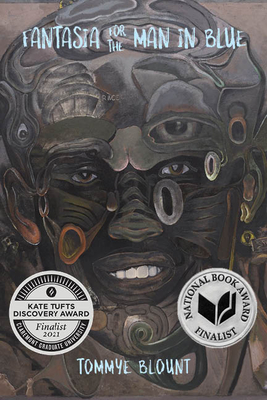 Fantasia for the Man in Blue (Stahlecker Selections)

In his debut collection Fantasia for the Man in Blue, Tommye Blount orchestrates a chorus of distinct, unforgettable voices that speak to the experience of the black, queer body as a site of desire and violence. A black man’s late-night encounter with a police officer—the titular “man in blue”—becomes an extended meditation on a dangerous erotic fantasy. The late Luther Vandross, resurrected here in a suite of poems, addresses the contradiction between his public persona and a life spent largely in the closet: “It’s a calling, this hunger / to sing for a love I’m too ashamed to want for myself.” In “Aaron McKinney Cleans His Magnum,” the convicted killer imagines the barrel of the gun he used to bludgeon Matthew Shepard as an “infant’s small mouth” as well as the “sad calculator” that was “built to subtract from and divide a town.” In these and other poems, Blount viscerally captures the experience of the “other” and locates us squarely within these personae.

Praise For Fantasia for the Man in Blue (Stahlecker Selections)…

“We have waited a long time for a full collection of the evocative provocations of Tommye Blount to be released. Poem by poem Blount’s first book has become one of the most anticipated books of poetry of his generation. Fantasia for the Man in Blue does not disappoint. It is a kaleidoscopic self-portrait, where the self is viewed from every vantage, inside out, then in again. Fearless in its observations. So fearless it makes us wince. So baring we can’t help but see ourselves in this mirror. . . .”
—Vievee Francis

“With Fantasia for the Man in Blue, Tommye Blount captures the tension between what horrifies us as a nation and of what we crave to soothe the pain. An achievement of saying what needs to be heard at a time when there’s so much chatter among us, Blount manages to cut through the din by directing us to the beauty that remains. Dear Tommye, thankfully, ‘you are the disobedient one, / littering the spangled blue night / with your dark tear,’ which is a comfort. These poems, a cocktail not only of urban gothic but also of a sublime fantasia, will change how we listen to the world around us and teach us the uses of its enchantment.”
—A. Van Jordan

"Tommye Blount's lyrics seem to live outside space and time, blending references to history, art, and contemporary concerns into expanding galaxies on the page...."
— Diego Bez

"Opening with a line from Hilton Al’s essay 'GWTW,' (shorthand for 'Gone with the Wind') the searing debut from Tommye Blount is magnetic and controlled. Through charged words, masterful line breaks, and ekphrasis and persona pieces, these poems blur the line between intimacy and violence...."

"In this debut collection, Blount considers the Black, queer body as the epicenter of both desire and violence, with the title poem addressing a Black man’s midnight encounter with a police office ('the man in blue') and other poems considering largely closeted singer/songwriter Luther Vandross and one of Matthew Shepard’s killers."

"The backbone of the book, a quartet of poems called 'Fantasia for the Man in Blue,' originated from two interactions I had with the Novi Police Department. When it happened I felt fractured. I set out writing the book to help me make sense of all those fractured parts, but it turned out to be an examination of the mutability, vastness, and dangers of beauty. When someone or something doesn’t fit a standard of beauty decided by the majority, it is deemed an intruder, and then suppressed, silenced, or killed—as we see so often now. This book is a testament of one such intruder to beauty."
https://www.pw.org/content/a_life_in_poetry_our_sixteenth_annual_look_at_debut_poets?article_page=5
— Dana Isokawa

A Cave Canem alumnus, Tommye Blount is the author of What Are We Not For (Bull City Press, 2016). A graduate of Warren Wilson College’s MFA Program for Writers, he has been the recipient of scholarships and fellowships from Kresge Arts in Detroit and the Bread Loaf Writers’ Conference. Born and raised in Detroit, Blount now lives in the nearby suburb of Novi, Michigan.
Loading...
or support indie stores by buying on