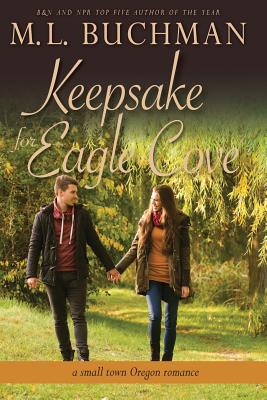 In the heart-warming conclusion to the Eagle Cove series: Tiffany Mills hides a secret about the small Oregon Coast town of Eagle Cove. The line between her past and her present grows blurred. Until, with her life as a recluse threatened, she must defend her beloved homestead in the woods.

Devin Robison wants nothing to do with women, at least for now. He needs a summer as far away from his past as he can get. The opposite of Chicago? A renovation job on a remote Oregon lighthouse keeper's cottage feels just perfect. But when their pasts collide and their present unfolds, they both discover the Keepsake for Eagle Cove.

M. L. Buchman has over 50 novels and 30 short stories in print. His military romantic suspense books have been named Barnes & Noble and NPR "Top 5 of the year" and twice Booklist "Top 10 of the Year," placing two titles on their "Top 101 Romances of the Last 10 Years" list. He has been nominated for the Reviewer's Choice Award for "Top 10 Romantic Suspense of the Year" by RT Book Reviews and was a 2016 RWA RITA finalist. In addition to romance, he also writes thrillers, fantasy, and science fiction. In among his career as a corporate project manager he has: rebuilt and single-handed a fifty-foot sailboat, both flown and jumped out of airplanes, designed and built two houses, and bicycled solo around the world. He is now making his living as a full-time writer on the Oregon Coast with his beloved wife and is constantly amazed at what you can do with a degree in Geophysics. You may keep up with his writing and receive exclusive content by subscribing to his newsletter at www.mlbuchman.com.
Loading...
or support indie stores by buying on