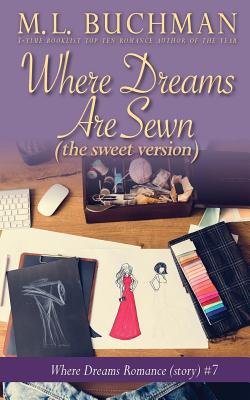 Where Dreams Are Sewn (Sweet) (Paperback)

-a Where Dreams romance story-

(This "Sweet Version" is the exact same story as the original, with no foul language and the bedroom door-even when there isn't one-tastefully closed.)

Kari Jones' dreams to be the next great fashion designer elude her. Lead fabricator for the next great designer works for her, mostly. When asked to collaborate on a new teen line, Kari's dreams start coming true.

Richard Nyberg's knowledge of women's fashion is limited to lighting them on the opera stage. Since his wife left, he struggles to raise his daughter himself. When she becomes a model for the new teen line, he encounters far more than he bargained for. Their tattered dreams can only be reborn Where Dreams Are Sewn.

M.L. Buchman started the first of now over 50 novels and as many short stories while flying from South Korea to ride his bicycle across the Australian Outback. Part of a solo around the world trip that ultimately launched his writing career. All three of his military romantic suspense series-The Night Stalkers, Firehawks, and Delta Force-have had a title named "Top 10 Romance of the Year" by the American Library Association's Booklist. NPR and Barnes & Noble have named other titles "Top 5 Romance of the Year." In 2016 he was a finalist for Romance Writers of America prestigious RITA award. He also writes: contemporary romance, thrillers, and fantasy. Past lives include: years as a project manager, rebuilding and single-handing a fifty-foot sailboat, both flying and jumping out of airplanes, and he has designed and built two houses. He is now making his living as a full-time writer on the Oregon Coast with his beloved wife and is constantly amazed at what you can do with a degree in Geophysics. You may keep up with his writing and receive a free starter e-library by subscribing to his newsletter at: www.mlbuchman.com.
or
Not Currently Available for Direct Purchase
Copyright © 2020 American Booksellers Association