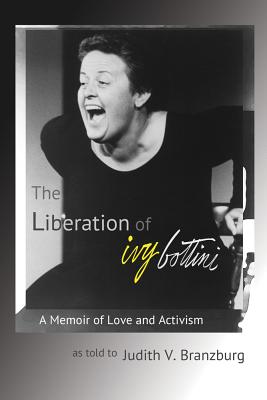 The Liberation of Ivy Bottini

A Memoir of Love and Activism

Colorful, charismatic, magnetic, and brilliant are just a few of the words used to describe Ivy Bottini, a woman who was at the forefront of the National Organization of Women (NOW) movement and the second wave of feminism. She helped found the New York chapter of NOW and in 1969 designed the organization’s logo, which is still used today. She then moved to Los Angeles and became an LGBT activist.

This is Ivy’s story, in her own words—an inspirational and educational story of personal transformation, courage, activism, love, and sacrifice. It’s also an insider’s view and a model for activism from a leader in two of the most important liberation movements of the past half century—women’s liberation, and gay and lesbian liberation.

Judith V. Branzburg, Ph.D.,  is an emeritus professor of writing, women’s studies, gay and lesbian studies, and American literature at Pasadena City College. Her essays have appeared in such publications as Lesbian Review of Books, Radical Teacher, and Callaloo: A Black Southern Journal for Arts and Letters. She has also published a novel, The Paris Adventures of Judith and Amy.
Loading...
or support indie stores by buying on