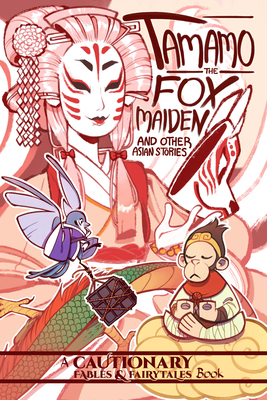 And Other Asian Stories

"A must for myth-loving middle schoolers." -- SCHOOL LIBRARY JOURNAL

This second volume of the "Cautionary Fables and Fairy Tales" graphic novel series is a thrilling, funny, and totally unexpected take on stories spanning the entirety of the Asian continent, with loads of lesser-known myths and legends from Tibet, India, Indonesia, and beyond. Featuring the work of GENE LUEN YANG, NICK DRAGOTTA, BLUE DELLIQUANTI, CARLA SPEED MCNEIL, NINA MATSUMOTO, and many more

Editor Kel McDonald has been working in comics for over a decade--most of that time has been spent on her webcomic Sorcery 101. More recently, she has organized the "Cautionary Fables and Fairytales" anthology series while contributing to other anthologies like Dark Horse Presents, Smut Peddler, and Sleep of Reason. She has also worked on Buffy: The High School Years. She recently finished a creator-owned series, Misfits of Avalon. She's currently working on her self-published series, The City Between. Her work can be found at kelmcdonald.com. Editor Kate Ashwin is a comic artist who lives in West Yorkshire, England, with her two fat cats and one very understanding husband. She's drawn and written over 1,000 pages of webcomics since 2002. Her most current project is the well-received Victorian-era adventure story Widdershins, which is currently on its sixth Kickstarter-funded volume. Kate has also contributed to, co-edited, and provided Kickstarter support to the "Cautionary Fables and Fairytales" books, written a story for Dark Horse Presents, and contributed artwork to critically-acclaimed kids' weekly comic The Phoenix.
Loading...
or support indie stores by buying on