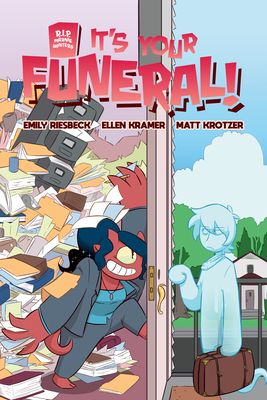 "A heartwarming story of healing and acceptance." -- BOOK RIOT

"A cheerful series of stories for fans of The Good Place." -- SCHOOL LIBRARY JOURNAL

"Come for the fun, stay for the heart." -- BOOKLIST

Marnie Winters was going to turn her life around; get out of the house, make friends, no more "Miserable Old Marnie " Everything was going to plan, but then, of course, she died. Now, Marnie's a ghost trapped on Earth, and the only one who can help her is the overenthusiastic, alien social worker, Xel, whose job is to help ghosts "close their file" and pass on. Are you ready for a sweetly nostalgic trip through Marnie's life, correcting mistakes and righting what once went wrong? Well sorry, this isn't that story Xel has a much better idea to soothe Marnie's troubled spirit: an internship in the hopeless bureaucracy of the trans-dimensional Department of Spectral Affairs

This new do-gooder duo has their work cut out for them in a series of hilarious mishaps and misadventures throughout the space-time continuum (but mostly in and around the office) as Marnie finds pathways through her feelings of worthlessness by helping others. A paranormal fantasy about healing, learning to love yourself, and being OK with being not OK, It's Your Funeral is the cosmic office comedy you've been dying to read

Emily Riesbeck has been self-publishing their webcomic, The Blue Valkyrie, for almost five years. Their short comic Library Love was featured in Volume 4 of the Chubby LGBT Anthology, and their short comic You Have Witchcraft on Your Lips was featured in Local Haunts. Ellen Kramer is a freelance artist and creator of the webcomic Parisa, published by Hiveworks. She also contributed a short comic to Boom! Studios' Regular Show 2017 Special. Matt Krotzer is a letterer of comics including Retcon (Image) and Masters of the Universe (Dark Horse), as well as the graphic novel Just Princesses.
Loading...
or support indie stores by buying on