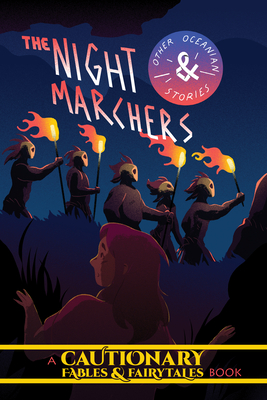 The Night Marchers and Other Oceanian Tales

Readers will want to revisit this collection. -- SCHOOL LIBRARY JOURNAL

"Do you hear them? Never go outside when you hear THAT sound."

Ghostly warriors, angry gods, and monstrous tyrants? That's just the start of this collection of folklore from the Pacific, retold in comics

The fourth volume of the "Cautionary Fables and Fairytales" graphic novel series is a thrilling, funny, and totally new take on stories spanning the entirety of the region, with loads of lesser known myths and legends from the Philippines, New Zealand, Hawaii, and beyond. Featuring the work of TINTIN PANTOJA, PAOLO CHIKIAMCO, ROB CHAM, TOKERAU WILSON, and more

Kate Ashwin has drawn and written over 1000 pages of webcomics since 2002, her most current project being the well-received Victorian-era adventure story Widdershins, which is currently on its sixth Kickstarter-funded volume. Kate has also contributed to, co-edited, and provided Kickstarter support to the "Cautionary Fables and Fairytales" books, written a story for Dark Horse Presents, and contributed artwork to critically-acclaimed kid's weekly comic The Phoenix. Sloane Leong is a self-taught cartoonist, artist and writer of Hawaiian, Chinese, Italian, Mexican, Native American, and European ancestries. Her work focuses on exploring silenced narratives from her own communities to connect personally with individuals through storytelling, with an aim to cultivate a kinder, more understanding future. She is currently living near Portland, Oregon. Kel McDonald has been working in comics for over a decade -- most of that time has been spent on her webcomic Sorcery 101. More recently, she has organized the "Cautionary Fables and Fairytales" anthology series while contributing to other anthologies like Dark Horse Presents, Smut Peddler, and Sleep of Reason. She has also worked on Buffy: The High School Years. She recently finished her creator-owned series, Misfits of Avalon, and the Eisner-nominated Stone King. She's currently working on her self-published series, The City Between. Her work can be found at kelmcdonald.com.
Loading...
or support indie stores by buying on