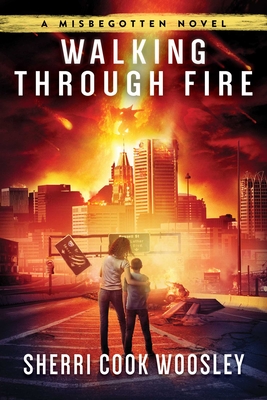 For fans of American Gods, a dark, humorous, and richly written, dystopian fantasy about the unbreakable bonds of family and the undying strength of a mother's love.
The end of the world begins as fire rains down from the heavens. Ancient gods are released from their prison, eager to reestablish their long-lost power. But Rachel Deneuve has bigger, more contemporary concerns than a divine war.

Her son Adam is in the middle of a fight against leukemia, and Rachel is determined to keep focused on that battle. But when humans begin picking sides and the fighting escalates, their home in Baltimore becomes a war zone, one she can’t ignore.

Desperate to stay away from the carnage—as well as the germ-ridden refugee center—Rachel and Adam flee to their remote mountain cottage, only to find their refuge marred by mutated, grotesque plants and animals. Eventually, the cancerous cells in Adam's body begin evolving as well, threatening his life and forcing Rachel to venture back into the eye of the storm. Left with no other choice but to sacrifice her own freedom for her son's safety, she must become an unwilling warrior in a battle unlike anything seen in millennia, or lose everything she holds dear.

Praise For Walking Through Fire: A Misbegotten Novel…

"The Stand meets American Gods in a shattered world, teeming with malignant gods unleashed. An intense, moving tale of a mother's quest to save her son in the face of overwhelming odds . . . I couldn't stop turning the pages."—Michele Lang, author of the Lady Lazarus series

"An effective mix of magic, religion, post-apocalyptic survival, and a healthy dose of the weird, all wrapped around a core of family and fierce love that lie at the story's heart."—A. C. Wise, award-winning author of The Kissing Booth Girl and Other Stories and The Ultra Fabulous Glitter Squadron Saves the World Again

"As a fan of apocalypses and Sumerian gods, and as a cancer survivor, I have a particular appreciation for Walking Through Fire—but I don't think you have to be any of these things to thoroughly enjoy Woosley's story."—Tom Doyle, award-winning author of the American Craftsmen series

"A perfect blend of post-apocalyptic and mythical fantasy, Woosley weaves a beautifully crafted tale of peril and strength, proving that even at the end of the world, the most powerful force on Earth and in the heavens above is a mother's love."—Anne Tibbets, Author of Carrier and Walled

"Inventive, expansive, and moving."—Taylor Zajonc, award-winning author of The Maw

"Any parent . . . will identify readily with Rachel's dilemmas, weaknesses, and strengths. [Woosley] draws us into the world of a parent of a gravely ill child as seamlessly as she draws us into a world of manipulative, powerful jealous gods—and magic."—Abyss & Apex magazine

"Woosley gets off to a running start in this debut series starter, and she draws on a mix of mythology and religious allusions to create a postapocalyptic world caught in a battle for control and power."—Booklist

"A well-plotted urban fantasy filled with harrowing battles, all sorts of freakish monsters, and ancient Sumerian gods . . . but all of those elements are enhanced because the stakes are grounded and relatable. Rachel and Adam, protecting each other, and family, complicated and messy"—Fantasy Hive

Sherri Cook Woosley, a Baltimore native, is an active member of the Baltimore Science Fiction Circle, having won their amateur writing contest in 2014. Her short stories can be found in Abyss & Apex, Pantheon Magazine, and Flash Fiction Magazine. Walking Through Fire is her debut novel. In addition to writing, she teaches yoga so other people can balance their lives while she juggles four kids, a dog, rabbit, and various other animals. She lives in Maryland with her family.
Loading...
or
Not Currently Available for Direct Purchase