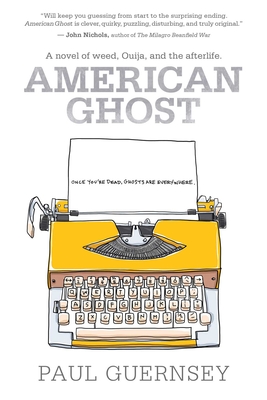 ***WINNER OF THE 2018 MAINE LITERARY AWARD FOR SPECULATIVE FICTION***

An inventive metafictional novel, in which a drug-dealing biker must solve his own murder from beyond the grave.

Thumb Rivera is in a bind. A college dropout, aspiring writer, smalltime marijuana grower, and biker club hang-around, Thumb finds himself confined to his rural ranch house in the desolate Maine countryside, helpless to do anything but watch as his former friends and housemates scheme behind his back, conspire to steal his girlfriend, and make inroads with the Blood Eagles, a dangerous biker gang.

A ghost forced to haunt his survivors and reflect back on the circumstances that led to his unsolved murder, Thumb discovers he has one channel through which he can communicate with the living world: Ben, an unemployed ghost hunter. Ben soon convinces local curmudgeon Fred Muttkowski, failed novelist turned pig farmer, to turn Ben’s Ouija-board conversations with Thumb into an actual book.

Thumb has two things on his mind: To solve, and then avenge, the mystery of his own violent death, and also to tell his story. That story is American Ghost—as told to Ben, then fictionalized by Fred. It's at once a clever tale of the afterlife, a poignant examination of the ephemeral nature of life, and a celebration of writing and the written word.

***WINNER OF THE 2018 MAINE LITERARY AWARD FOR SPECULATIVE FICTION***

“An incredibly charming novel about writing, the afterlife, and trying to move on in the here-and-now, even when you don’t know how to get from point A to point B. . . . American Ghost is an excellent read.”—B&N Sci-Fi & Fantasy Blog

“Will keep you guessing from start to the surprising ending. American Ghost is clever, quirky, puzzling, disturbing, and truly original.” —John Nichols, author of The Milagro Beanfield War

“Fantastic (and phantasmagoric), utterly original in its depiction of an afterlife where ghosts are driven to conclude their own unfinished tales, and set in a backwoods Maine populated by meth-dealers and motorcyclists, live-wires and lost souls, American Ghost will haunt you long after you've turned the last page.” —Paul Doiron, author of The Poacher's Son and Editor Emeritus of Down East: The Magazine of Maine

"The fact that Thumb Rivera is dead is the least of his problems. In this supple, dark and genuinely funny novel, Paul Guernsey tells the tale of a goodhearted stoner who has to avenge his own murder before he can even think about the sweet hereafter. American Ghost will make you want to believe." —Jacquelyn Mitchard, author of The Deep End of the Ocean

“A modern-day ghost story set in a gritty gang underworld, replete with enticing elements of both murder mystery and revenge thriller; rarely can a book claim to be so genuinely ghostwritten. . . . At times utterly chilling and yet also curiously affecting, this is a story like no other.” —Grey Malkin, Folk Horror Revival

“Motorcycles from underworld to underworld until all that remains is the reader’s own gyrating, tremulous heart. So pull on your black boots, clip your broken wings onto the handlebars, slide your spirit board into the saddlebag, and whatever you do, hang on tight.” —Abby Frucht, author of Polly’s Ghost

Paul Guernsey is an author, editor, and college instructor. His first novel, Unhallowed Ground, was a finalist for the PEN Nelson Algren Fiction Award. When not writing, Guernsey teaches writing and communication at Unity College in Maine and runs the popular website The Ghost Story, home of The Ghost Story Supernatural Fiction Award, a highly regarded international short story competition. American Ghost is his third novel.
Loading...
or
Not Currently Available for Direct Purchase