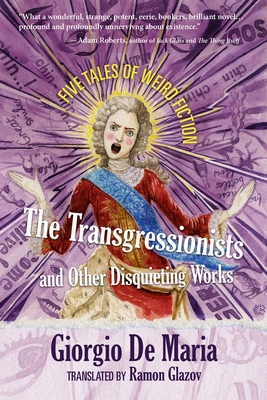 The Transgressionists and Other Disquieting Works

"A disturbing, unsettling novel . . . if it had been published in English soon after its first appearance in Italian (1968), the name of Giorgio De Maria would be well-known, his novels and stories mentioned in the context of J.G. Ballard, Anna Kavan, Shirley Jackson or Robert Aickman."—Lisa Tuttle, Nebula Award winner and author of Gabriel, Windhaven, and The Curious Affair of the Witch at Wayside Cross.

Before an untimely mental breakdown cut short his two-decade career, Giorgio De Maria distinguished himself as one of Italy's most unique and eccentric weird fiction masters. With a background in the post-war literary culture of Turin -- Italy's urbane but eerie "city of black magic" -- De Maria drew inspiration from the Turinese underbelly of occultism, secret societies and radical politics. His writing coincided with the decade of terrorist violence known to Italians as the Years of Lead; the outcome was a weird fiction suffused with panic, rage, trauma, paranoia and meditations on antisocial hubris. In 1978, he told an interviewer: "...I think that the dimension of the fantastic, as much as this may seem paradoxical, is the most fitting one to express a reality as complex as ours today."

De Maria's debut novel, The Transgressionists (1968) portrays a cell of malicious telepaths who meet in the cafés and jazz clubs of 1960s Turin to plot world domination. After experiencing the worst of their power, an embittered office clerk resolves to join them and prove himself worthy to share in their villainy. He cultivates twisted mindfulness techniques to awaken his inner sociopath. He fights off predatory phantoms that seem maddeningly drawn to him. He prepares for the dangerous "Great Leap" which will make him into a fully-fledged Transgressionist. But could his megalomania strain relations with his fiancee? Will he sacrifice love in his quest for omnipotence?

The other works in this volume are no less surreal and startling. The Secret Death of Joseph Dzhugashvili (1976) gives us a nightmarish fantasy Soviet Union, where a dissident poet finds himself trapped in a psychological experiment conducted by Stalin himself. In "The End of Everydayism," a group of futuristic artists begin using corpses as a medium -- with violent, unforeseen results. The antihero of "General Trebisonda" is a possibly insane commander who prepares for a war crime in an eerily deserted fortress.

Available in English for the first time, this collection contains two novellas, two short stories and a dystopian teleplay, The Appeal, which the post-cyberpunk novelist Andrea Vaccaro has lauded as "worthy of the best episodes of Black Mirror." Meanwhile, an introduction by translator Ramon Glazov offers a detailed account of De Maria's background, creative context and thoroughly unusual life.

Praise For The Transgressionists and Other Disquieting Works: Five Tales of Weird Fiction…

Praise for The Transgressionists and Other Disquieting Works

"A disturbing, unsettling novel . . . if it had been published in English soon after its first appearance in Italian (1968), the name of Giorgio De Maria would be well-known, his novels and stories mentioned in the context of J.G. Ballard, Anna Kavan, Shirley Jackson or Robert Aickman."—Lisa Tuttle, Nebula Award winner and author of Gabriel, Windhaven, and The Curious Affair of the Witch at Wayside Cross.

"What a wonderful, strange, potent, eerie, bonkers, brilliant novel The Transgressionists is! De Maria's particular genius is to notate those moments in otherwise ordinary existence when the veil of sense and familiarity trembles, when it threatens to fall away entirely revealing something profound and profoundly unnerving about existence."—Adam Roberts, author of Jack Glass and The Thing Itself

"Ramon Glazov's translation (with a laudably enlightening introduction) of Giorgio De Maria adds valuably to our appreciation of the pan-European Weird. Little-known until recently even in his native Italy, De Maria is deeply unsettling and destabilising as well as hilarious. How about a perverse game show where death-row prisoners compete for a pardon? How about a 'new normality' art movement that anticipates Gunther von Hagens' shows of plastinated corpses? Or a secret account of Stalin's psychopathology told by a pampered scapegoat? Or a clique of predators upon ordinary folk? Italy has reason to be proud of its rediscovered son."—Ian Watson, author of the Screen Story of Steven Spielberg's Artificial Intelligence

Praise for Twenty Days of Turin
"An admirable translation... This is a book written in 1975 and featuring no technology more advanced than high-end analog audio recordings, yet it grasps the implications of social media in ways cyberpunk never did... It may be the novel that foreshadows our moment more accurately than any number of speculative fictions...A welcome and timely addition to the weird fiction of distinctly earthly terrors."—Peter Berard, LA Review of Books

"Remarkably prescient. There was a disquieting commonality between its intended place and moment and the one we find ourselves in now... No Gibson, no Sterling, no cyberpunk or spec-fic scribbler of the '80s or '90s ever captured the poisoned zeitgeist of social media better than this... It was a book written for a different world. And the most disturbing thing about it is how appropriate it is for ours."—Jason Sheehan, NPR.org

"Almost forgotten to the ash heap of collective literary amnesia, Giorgio De Maria's masterpiece oozes with unsettling creepiness and despair as strange gods play out their violent fantasies in an Italy gone quietly insane. This one will slip its way into your darkest dreams."—Christian Kiefer, author of The Animals

Praise for Giorgio De Maria
"More so than any writer of fiction, [De Maria] brings the conscience of Europe to bear upon the waste of post-war civilization."—Matthew Walther, The Week

GIORGIO DE MARIA (1924-2009) was an Italian novelist, musician, critic and playwright. Devoting himself to fiction after an illness cut short his career as a pianist, he wrote four novels (two of which are included in this volume), two plays for stage and television, and several short stories. A second tragedy curtailed his literary career in the 1980s and he spent the final thirty years of his life struggling with mental illness and writing no significant works. Out of print for decades, De Maria was, until recently, better remembered as a songwriter than for his weird fiction. This situation changed in 2017 when Liveright released an English translation of his last novel, The Twenty Days of Turin (1977). Republished in Italy and hailed as the "one true cursed Italian novel," it has led to an ongoing rediscovery of De Maria as both a weird fiction master and a lost pillar of Italian modernism.

RAMON GLAZOV is a translator, fiction author, reviewer and doctoral student based in Melbourne, Australia. His writing has appeared in Overland, Jacobin, The Monthly, Tincture Journal and The Saturday Paper. He has also translated Giorgio De Maria's The Twenty Days of Turin (Liveright, 2017).
Loading...
or support indie stores by buying on