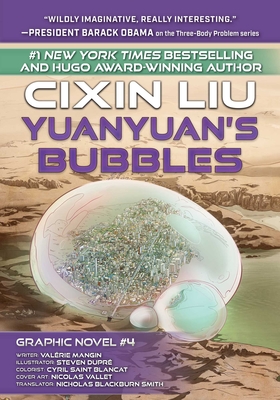 Ever since she was a child, Yuanyuan always dreamed of blowing big bubbles. But her father worries about her fascination—he wants Yuanyuan to be as responsible and devoted to a calling as her mother was. As an adult, Yuanyuan creates a multimillion-dollar business out of the technology she developed for her doctoral thesis. But she still dreams of blowing the biggest bubble she can. When his daughter uses her high-tech methods to blow a bubble big enough to envelop a city, Yuanyuan’s father thinks back to the dreams he and Yuanyuan’s mother chased when they were young. In the end, Yuanyuan’s bubbles bring her father’s dreams to life.

The fourth of sixteen new graphic novels from Liu Cixin and Talos Press, Yuanyuan's Bubbles is an epic tale of the future that all science fiction fans will enjoy.


The French writer Valérie Mangin, born in 1973, was a specialist of the Latin historic period, a specialist of history, and a historian of arts. But, unable to accept a career as a curator, she jumped from official history to stories after meeting her husband, Denis Bajram. The 60 different stories she has published, though taking the appearance of classical adventures, are in fact giant games she has invented about history, politics and culture. She like to play with all types of popular literature, as well as historical facts, to give us original points of view and help us to discover well-known events again. With her husband, she contributed to the birth of the official professional organization of French comic-book artists (SNAC-BD), and to the États Généraux de la Bande Dessinée, helping the professionalization of this artistic domain.

The Belgian artist Steven Dupré started his career as a professional cartoon artist in 1986 with the series Wolf, which he drew and wrote on a daily basis for the Flemish newspaper Het Volk. Twenty volumes were published until he created the much-acclaimed and prize-winning children's comic Sarah & Robin. He then made the leap over the language-frontier existing in his trilingual country to write (in French) and draw the trilogy Coma. He is best known as an artist for the comic book adaptations of the French television series Kaamelott. In 2011, he won the bronze Adhemar, the cultural prize of the Flemish government for comic artists, with his series Midgard. With Valérie Mangin as the writer, he drew both volumes of Le Club des prédateurs. His work is mostly available in French and Dutch languages, and some of them are translated now into Indonesian, English, Servo-Croatian and Finnish.
Loading...
or support indie stores by buying on