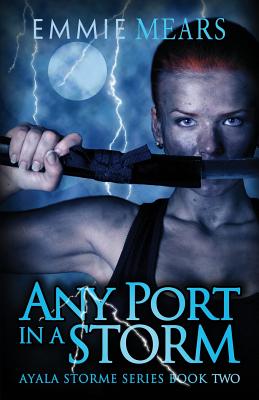 Any Port in a Storm (Ayala Storme #2)

After months of training a budding army of human/demon hybrids, Ayala and Carrick have worked out most of their differences. Who gets to use the bathroom first in the morning. Who'll feed the bunny before they go out to make mayhem. Who gets to keep the jeeling claw they found in Forest Hills. You know, the important stuff.

But when Gregor sends them out with their battalion of shades and the mission quickly lands on the wrong side of Ayala's "don't kill norms" moral line, she quickly discovers that maybe morality wasn't the motivator behind Gregor's pet project--or at least not when money's involved. And when a trio of shades starts murdering the populace in Nashville again and targeting places and people significant to Ayala, her desire to help her own comrade shades stay on the good side of the Mediators will place her at their mercy again.

With the Summit fracturing and demons closing in on the city, saving the shades and herself may cost Ayala everything.