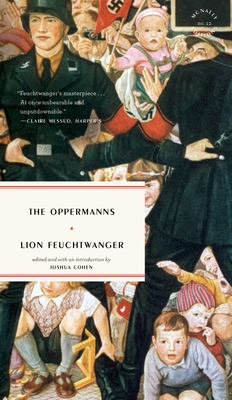 Written in real time, as the Nazis consolidated their power over the winter of 1933, The Oppermanns captures the fall of Weimar Germany through the eyes of one bourgeois Jewish family, shocked and paralyzed by an ideology they cannot comprehend.

In the foment of Weimar-era Berlin, the Oppermann brothers represent tradition and stability. One brother oversees the furniture chain founded by their grandfather, one is an eminent surgeon, one a respected critic. They are rich, cultured, liberal, and public spirited, proud inheritors of the German enlightenment. They don’t see Hitler as a threat. Then, to their horror, the Nazis come to power, and the Oppermanns and their children are faced with the terrible decision of whether to adapt—if they can—flee, or try to fight.

Written in 1933, nearly in real time, The Oppermanns captures the day-to-day vertigo of watching a liberal democracy fall apart. As Joshua Cohen writes in his introduction to this new edition, it is “one of the last masterpieces of German-Jewish culture.” Prescient and chilling, it has lost none of its power today.

Praise For The Oppermanns…

“Feuchtwanger’s masterpiece . . . At once unbearable and unputdownable.”
— Claire Messud

"As for Feuchtwanger, the same year that The Oppermanns was published, the German Jewish author was stripped of his citizenship and had his property in Berlin seized and his books burned . . . He ultimately escaped to the United States, where he lived for the last 17 years of his life. Is this still the same country where he’d find refuge?"
— Pamela Paul

"Readers will be struck by how little the language about White supremacy, antisemitism, the swapping of lies for facts, the discrediting of the press, and the embrace of violence over reason has changed. It's hard to imagine a 90-year-old book being more timely."
— Kirkus (starred review)

“The Nazi cloud deepens on the horizon. But anyone who has read Mein Kampf in one of its early editions will appreciate the witticisms a reading aloud of some of its passages arouses in [the Oppermanns’] circle. When all else fails they can always fall back on ‘The Leader’s’ German prose for entertainment. They refuse to believe that such a fellow can ever come to power over the German folk . . . And so this novel is addressed to the German people, who will not be allowed to read it, urging them to open their eyes. And it is addressed to the world outside bearing the message ‘Wake up! The barbarians are upon us!’”
— Fred T. Marsh

“Solid and exciting, conceived and realized by an artist, the best novel Feuchtwanger has written.”
— Nathan Asch

“Feuchtwanger reveals the strength of his argument by understatement, for he is writing a narrative, not a tract . . . There are few novelists living today who can compete with Feuchtwanger’s rare gifts of historical observation and understanding of individual character.”
— Horace Gregory

Lion Feuchtwanger (1884–1958) was known in the 1920s as a bestselling historical novelist, a frequent collaborator with Bertolt Brecht, and an early, outspoken critic of the Nazi movement. Forced into exile in France, Feuchtwanger and his wife were interned by the Vichy government during World War II. They escaped to the United States and settled in Pacific Palisades, where they became central figures in the émigré community that included Brecht as well as Thomas and Heinrich Mann, among many others.

Joshua Cohen is the author of the novels The Netanyahus, Moving Kings, and Witz, among others. He is the editor of He: Shorter Writings of Franz Kafka and I Want to Keep Smashing Myself Until I Am Whole: The Elias Canetti Reader.
Loading...
or support indie stores by buying on
(This book is on backorder)