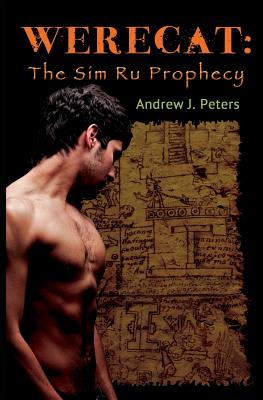 Werecat: The Sim Ru Prophecy is the final installment of The Romance Reviews Readers' Choice favorite, the Werecat series

A fugitive from two murder investigations in New York City and a bizarre, big cat attack at a bank in Barbados, Jacks Dowd flees to South America to find the ringleader of a shifter terrorist organization deep in the Amazon. The world is on the brink of all-out war between shifters and humans, and Jacks needs to somehow broker a deal for peace.

But a special U.S. intelligence agency emerges as a new, possibly even more dangerous enemy. Both the terrorists and the U.S. government will stop at nothing to get an arcane codex that could unleash an unstoppable threat to mankind or exterminate werecats everywhere.

While Jacks dodges danger from both sides and decodes the ancient book, he's left with the impossible choice of how to use it.

Buy now and get a free Kindle version with paperback purchase

This action-packed gay shapeshifter romance brings Andrew J. Peters' Werecat series to its stunning conclusion. Peters tells fans that his original Werecat romance was an experiment. He asked himself: What would a gothic paranormal romance story look like with gay men in prominent roles? Now, this Romance Review Readers Choice finalist reaches its apex, as Jacks Dowd makes peace with his Werecat nature.