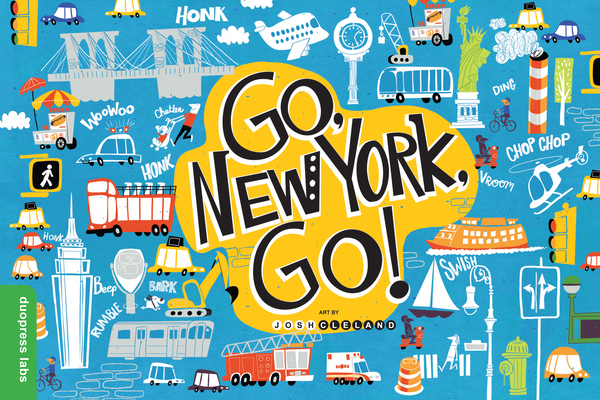 A subway car whooshes, an airplane roars, and a police car goes weeeoooeee, weeeoooeee on the streets of New York. In the city that's always on the move, this lively book puts the little ones in the driver's seat with a cacophony of sounds right on the city streets. The sturdy pages feature classic fire trucks, diggers, motorcycles, and boats that circle the island, as well as bicycles (ding‑ding!), skateboards (swish!), and abundant strollers in the park. This book will surely charm any young vehicle enthusiast and the many tots that love New York.

duopress labs is the creative team, led by Mauricio Velázquez de León, responsible for writing and developing dozens of books and games. Recent titles include The Belly Sticker Book; the SmartFlash™ and TummyTime® series; 100 Pablo Picassos; My Fridge; and My First Lift-the-Flap Animal Book. Mauricio has written for Lonely Planet, Chouette, PowerKids Press, and the magazines Gourmet and Saveur. He resides wherever he can find a good Wi-Fi connection and strong coffee, mostly in the eastern United States.

Josh Cleland is an illustrator working out of his home studio just outside of Portland, Oregon, where he resides with his wife, Rayna. You will find his work in various children’s magazines, including Highlights and Storytime, and in other media such as greeting cards, websites, billboards, and more. His recent illustrated children's books include TAD and Portland Baby.
Loading...
or support indie stores by buying on