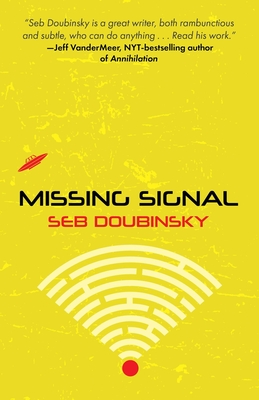 From Seb Doubinsky, author of The Song of Synth, The Babylonian Trilogy, White City, Absinth, Omega Gray and Suan Ming, comes his highly anticipated next installment in the City-States Cycle.

Missing Signal—a riddle wrapped in a mystery inside a government conspiracy? Agent Terrence Kovacs has worked for the New Petersburg Counter-Intel Department propagating fake UFO stories for so long that even he has a hard time separating fact from fiction. Especially when he’s approached by a beautiful woman named Vita, who claims she’s been sent from another planet to liberate Earth.

"Beneath the entertaining wrapper of science fiction, Missing Signal is a masterfully written work, both provocative and rewarding." — Foreword Reviews

“Crisp chapters cartwheel you in an incredible odyssey that gets wilder and weirder as it possesses you . . . Something about the novel abolishes distraction. Once you open the book, you are committed. No hard work, just a heart-thud moment, electricity, and you’re hooked. In its tiny chapters pulsing with voltage, the narrative leaves nothing short. The reading is like a golden egg hunt, literary gifts tucked away in findable nests.” — Eugen Bacon, Breach Magazine

"Seb Doubinsky's always been a critique of modern politics and the tyrannical fallacies of consumerism. Missing Signal is another addition to that nuanced, but powerful legacy as it's a novel about being told what to do and who to believe, which doesn't lead to any satisfying answers if you don't proactively choose your own path through a maze of make believes and misinformation." — Benoit Lelievre, Dead End Follies

“I’m delighted to have discovered an exciting new voice in Seb Doubinsky’s unusual novella. This is not a traditional sci-fi story but is one which offers a disturbing glimpse into a dystopian city-state future which reflects, albeit in an exaggerated way, so much of all that is disturbing in our 21st century world.” — Linda Hepworth, Nudge-Book Magazine

"Thought provoking and incredibly entertaining, Seb Doubinsky’s latest novel is a wonderfully quick read that is the perfect pick me up. Full of quirks, questions and complex puzzles ranging in length from a single sentence to a handful of pages, Missing Signal is the perfect getaway that will appeal to seasoned science fiction readers and newcomers alike." — Melissa Ratcliff, Paperback Paris

"This book was a wonderful science fiction read, and I would recommend it to anyone looking for a new mysterious adult sci-fi novel." — Bri's Book Nook

"Each chapter is both precise and thought provoking. It's art in novel form, philosophy that's been entwined with promises of aliens and mind altering drugs." — Books to Combat the Rain

Seb Doubinsky is a bilingual writer born in Paris in 1963. His novels, all set in a dystopian universe revolving around competing cities-states, have been published in the UK and in the USA. He currently lives with his family in Aarhus, Denmark, where he teaches at the university.