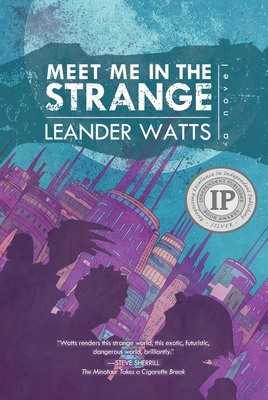 Meet Me in the Strange

Meet Me in the Strange is an intoxicating adventure set in a glittery, retro-futuristic world of glam rock, spectral aliens, and gender-bendy teens. Davi is mesmerized by a girl at a concert, who appears to lose herself in the power of the otherworldy music of Django Conn. Later, through a chance meeting, Davi becomes friends with the girl, Anna Z. She is like no one Davi has ever met: she loves to talk, talk, talk and has grandiose theories of the next evolution of humans and a strange phenomenon she calls the “Alien Drift.”

But danger lurks around every corner, because Anna Z is on the run, and her cruel and controlling older brother is determined to find her, at any cost. Davi faces a daunting decision, go on living a safe existence at the magical Angelus Hotel, which has been in the family for generations, or help Anna Z escape her troubled past. When the two take off to follow the concert tour of their glam-rock idol, Django Conn, Davi and Anna Z will face the biggest threat of their young lives.


Praise For Meet Me in the Strange…

“The world of the novel, from its language and geography to its layers of popular culture, is drawn with intricacy and vitality . . . Watts successfully captures not only the gravity of a teenage subculture, but also the more mercurial feeling of an axial generation on the cusp of something completely new. A bighearted and imaginative tale about a glam god’s fans.” — Kirkus Reviews

“In an intoxicating swirl of futuristic imagery and existential inner reflection, Meet Me in the Strange treats music and spirituality as one and the same . . . a wondrous, alien tale, not quite like any other story out there.” — Foreword Reviews

“The story was magical and cool and out there (in a good way). The characters had an almost biblical innocence to them which was enhanced and made even more believable by the god-like persona of their rock god. Also, I loved the literary references littered throughout the story (I see you, Frankenstein). Definitely check out Meet Me in the Strange.” — TRL Reviews

"This story is crazy and a smooth ride from start to finish…this book was an enjoyable read and I’m glad I got the chance to read it." — Radioactive Reviews

"This is a story about being vulnerable, breaking through isolation, and finding places (times, songs, friends) that make you feel you can belong . In a heightened landscape it invites you to float away with it, but it's a very human experience at heart." — Winged Reads

"Meet Me in the Strange is a very visual book (it lends itself to being made into a film!) and, for a hugely captivating few hours, felt drawn into a psychedelic fantasy world. Although it is a book which is aimed at the 12-18 age group I, several decades beyond this target group, thoroughly enjoyed being transported to a different realm!" — Nudge-Books Magazine

"Meet Me in the Strange by Leander Watts is a fascinating book that blends music and mysticism to create an atmosphere both foreboding and full of possibilities all at once....impossible to put down." — Portland Book Review

"Meet Me in the Strange is a beautifully written coming-of-age story about all the ways in which you feel most at home when you find the people who are looking for the same home you are. Davi (whose gender is never specified) is a glorious combination of curiosity, self-doubt, and determination, while Anna Z. is delightfully too weird and too certain for manic pixie dream girl status. (She is actually the long awaited evolution of the manic pixie dream girl.) The worldbuilding is subtle, the setting a mix of big city, old world, and some Carnival of Venice flash and style. And Django Conn is enough like Bowie to make a fan weep." — Colleen Mondor, Locus Magazine

"A glimpse into the daily life of an imagined teenager in the future, including his love of music and his attempt to help Anna get free from her brother. Indeed, since I completed this book it keeps popping back into my head – the world and the feel of it, right down to the musty splendour of the hotel, which has seen better days. Recommended for readers who also enjoy music as well as inventive and futuristic world building. " — Brainfluff

"Leander Watts has written a really cool story. Meet Me in the Strange is artistic and original. Because of the vibrant and colorful descriptions I could easily picture the futuristic setting. It felt like looking at a magical painting that constantly keeps changing and I loved the effect the story had on me...unique and surprising and filled with energy, imaginativeness and inspiration." — With Love for Books

An avid musician, Leander Watts has played and sung for decades in a wide variety of bands. His interests range from garage rock to skronky jazz, from baroque organ to Appalachian gospel. The first rock concert he attended was David Bowie on the Diamond Dogs tour in 1974. He teaches writing and literature at the State University of New York at Geneseo (his alma mater). Leander Watts is the author of Stonecutter, Wild Ride to Heaven, Ten Thousand Charms, and Beautiful City of the Dead.