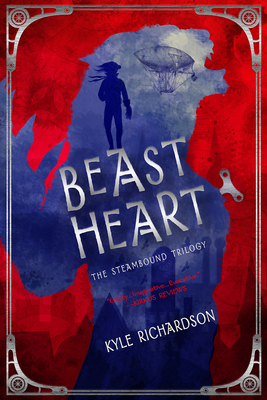 Book 1 of the Steambound Trilogy. When Gabby’s hand turns to steam, her mom hires an engineer to build a clockwork glove. It’s the last thing Gabby wants—if only she could be normal. But when her mom is attacked by something monstrous, normal is no longer an option. Now the only person she can turn to is a grizzled detective, who promises to help her become something … more.

Meanwhile, Kemple’s foster dad treats him like a slave. And the beatings are getting worse. So when a rebellious girl named Josephyn arrives—with a plan to escape to the city—he doesn’t hesitate. But there are creatures in Iron Bay whose slashes are worse than skin-deep. And as Kemple evolves into something inhuman, his search for a cure begins. They are strangers in a city where carriages rattle, airships rumble, and their own dark pasts continue to haunt them. Soon their paths will collide, and the girl who slays monsters will come face to face with the boy who is becoming a beast.

"Kyle Richardson’s YA novel, Beast Heart, is a wonderful and original mix of action, psychology and suspense. Blending steampunk and horror, it is an efficient thriller that captures the reader and makes him or her wanting for more. Very highly recommended, for adults and teenagers alike." —Seb Doubinsky, award-winning author of the City-States Cycle series

"Kyle Richardson pumps blood into machinery in Beast Heart, bringing his characters to life in this clever, emotionally engaging novel. Richardson is a writer to watch." —Kaaron Warren, award-winning author of Tide of Stone and Into Bones Like Oil

"Hands made of steam, cranks that conceal monsters, clockwork creations of jealous villainy: Richardson's Beast Heart beats with beautiful whimsy and honesty about the pains of adolescence, abuse, and bullying. It also nurtures hope that its heroes can hold on to their humanity." —Rebecca Gomez Farrell, author of Wings Unseen

"A rare treat that manages to seem familiar from the start yet surprise at every turn." —G.D. Penman, author of The Year of the Knife

"A girl with an amazing hand and a boy with a deadly condition collide in this YA steampunk novel by Richardson. Gritty … imaginative … evocative." —Kirkus Reviews

Starred Review: "An explosion of action … Iron Bay is all dark alleys and howls in the night." —Foreword Reviews​

"A girl with an amazing hand and a boy with a deadly condition collide in this YA steampunk novel by Richardson, the first in a trilogy ... Richardson’s prose possesses the gritty urgency of urban fantasy ... readers will be interested to see where he takes goes with these two slow-cooked characters and their evocative milieu." —Kirkus Review

"As a steampunk nerd, I think this book does a fantastic job of portraying the genre … this book was amazing and kept me flipping pages faster than a speeding bullet (see what I did there?). Beast Heart stayed with me long after I finished reading." —Michelle Meng's Book Blog

"Beast Heart is a novel which is rich in detail. A slow building tale that for a shorter, slow-building novel manages to pack a punch and draw you in with every turn of the page. It is deliciously dark and gritty with a real heart to it (just like the title suggests) and each character adds a depth needed to the story ...Prepare to redefine the way you see monsters. The writing style subtle yet wickedly dramatic at the same time. And that ending!" —Mama Mummy Mum Book Blog

"This book was such a refreshing take on the paranormal genre and I was so enthralled with the story! … I found myself totally in love with each of the MCs. I mean, it probably helped that I’m a glutton for characters with dark and gloomy backgrounds … This book is utterly unique and I need more stories like this!" —YA It's Lit

5 stars: "Beast Heart is a combo of sci-fi steampunk and horror. I was genuinely rooting for all three characters. Each one is a badass in their own way. Beast Heart is the first book in the trilogy and I cannot wait for book 2. This is the first steampunk novel that I've read and it is a fantastic intro into the genre." —Crystal's Library

"Beast Heart is an intelligent, well written, absorbing story. The tribulations of the main characters deserve our time, mind and heart. Everything in Beast Heart is about what makes us tick." —Mythical Books

5 stars: "The writing, the pacing, the originality, the characters…really, everything about this book is what I was hoping for. It grabs you and doesn’t let you go until the end. Highly recommended. Worth all the stars!!" —Jessica Belmont's Blog

"This book was so much fun. I loved this dark, twisted world ... Not only are these characters engaging, but the entire world is fascinating! I loved the dark, steampunk world Richardson created. It was great combination of spooky/horror, and more modern/realistic.I cannot wait for the next book to come out!" —Book Unicorn Reviews

"I did really enjoy this compelling story that enthralls me in three days straight. It is a great addition to YA novels with its brilliant storytelling and steampunk background and a touch of paranormal. Even this got the horror and brutal part, still, there are bits of humor and lightness as you explore the book. It’s an easy read and you get to catch on every scene. Also, you will like the actions and anticipations until the last page." —Descendent of Poseidon Reads

Kyle Richardson lives in the suburban wilds of Canada with his adorable wife, their rambunctious son, and their adventurous daughter. He writes about shapeshifters, superheroes, and the occasional clockwork beast. His short fiction has appeared in places such as Love Hurts: A Speculative Fiction Anthology and Daily Science Fiction.