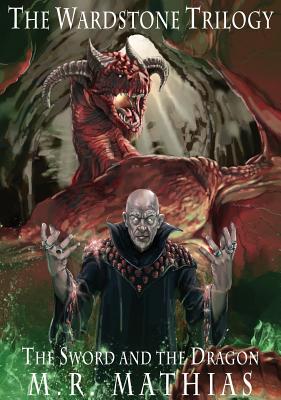 The Sword and the Dragon (Wardstone Trilogy #1)

Brothers torn by magic. A sorceress with dragony aspirations. A wolf King, a Royal Wizard, a squire fleeing with a coveted sword. What could possibly go wrong when they all collide in Highwander, where the very bedrock is formed of the powerful substance known as Wardstone?

The Sword and the Dragon
When the Royal Wizard of Westland poisons the king so that his puppet prince can take the throne and start a continental war, a young squire is forced to run for his life carrying the powerful sword his dying monarch burdened him with from the death bed.

Two brothers find a magic ring and start on paths to becoming the most powerful sort of enemies, while an evil young sorceress unwillingly falls in love with one of them when he agrees to help her steal a dragon's egg for her father. Her father just happens to be the Royal Wizard, and despite his daughter's feelings, he would love nothing more than to sacrifice the boy

All of these characters, along with the Wolf King of Wildermont, the Lion Lord of Westland, and a magical hawk named Talon, are on a collision course toward Willa the Witch Queen's palace in the distant kingdom of Highwander. There the very bedrock is formed of the powerful magical substance called Wardstone.

Who are the heroes? And will they get there before the Royal Wizard and his evil hordes?

Whatever happens, the journey will be spectacular, and the confrontation will be cataclysmic.