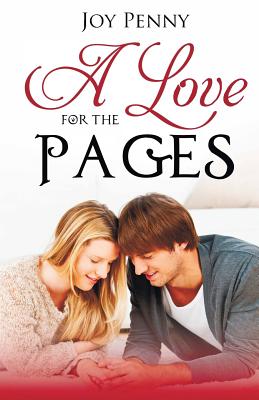 A Love for the Pages (Paperback)

Kiss. Marry. Kill. Nineteen-year-old June Eyermann has always known exactly which of her favorite Byronic heroes goes where. She'd kiss moody and possessive Rochester from Jane Eyre and marry prideful but repentant Darcy from Pride and Prejudice, leaving obsessive and spiteful Heathcliff from Wuthering Heights to be chucked off a cliff-but no. She couldn't leave any of her heroes behind. She lives for her favorite fictional worlds.

But June is about to get a serious wake up call when she returns home for the summer after her college freshman year. Stuck somewhere between feeling like a kid again under her parents' roof and being forced to start acting like an adult with worries about her future career, June looks at the library volunteer position offered to her as a way to keep her sanity for the next few months before she can go back to school.

What June doesn't expect to find at the library is her favorite romantic heroes brought to life-all in the same man. Obstinate, prideful and even a bit rude, Everett Rockford shouldn't exactly be "dating material," even if June's heart rate accelerates whenever she's near him. But after discovering his enigmatic past and witnessing a few fiery moments of tenderness, June can't help but see Rochester, Darcy and even Heathcliff in Everett. If she's going to make it through the summer without becoming a tragic heroine in her own story, she has to separate the man from the ideals of fiction in her head. Because if there's one thing she knows about Byronic love stories, it's that they don't always end happily ever after.

Joy Penny writes books, devours stories, and geeks out about everything from classic romance books to manga. When she's not working as a freelance writer and book editor, she's probably immersed in her favorite TV shows, period dramas, and anime series. She also writes YA speculative fiction as Amy McNulty, and one of her books, Nobody's Goddess, won The Romance Reviews' Summer 2016 Readers' Choice Award for Young Adult Romance.
or support indie stores by buying on
Copyright © 2020 American Booksellers Association