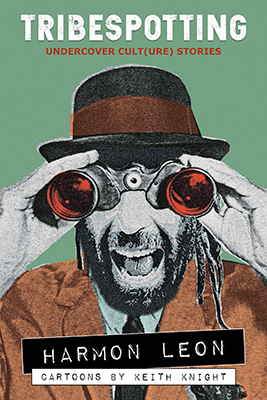 "This book was eye-opening ..." -David Litt, author of NY Times bestseller Thanks, Obama

The United States is a divided country, where two disparate tribes fight to provoke, condemn, and defeat the other. In Tribespotting: Undercover Cult(ure) Stories, Harmon Leon dives directly into the eye of the tribal storm, drastically changing his look and attitude as he goes undercover in an exploration of tribal behavior and its many manifestations in modern culture.

Employing the same inimitable style that he honed while infiltrating extremist groups, Leon introduces readers to a series of vastly different tribes, including a gathering of five thousand assault weapons fanatics, a clan of white supremacists who recruit at Applebee's, a church of hookers who walk the streets for Jesus, and a meeting of cult members who stare at their leader's handsome face.

Some of these tribes engage in harmless, hobby-loving fellowship while others revolve around the adulation of charismatic celebrities. Some of these tribes strive to uplift the individual via religious enlightenment, and a few are actually full-blown cults. But at the root of all these different tribes lies the same psychological need--the desire to be around like-minded people.

With that in mind ... LET'S DO SOME TRIBESPOTTING

HARMON LEON is a journalist, comedian, and filmmaker. He is the author of seven previous books, including Meet the Deplorables: Infiltrating Trump America, as well as The Harmon Chronicles and Republican Like Me, which both won Independent Publisher Awards for humor. Leon's writing can be found in Vice, The Nation, The Observer, Esquire, Ozy, National Geographic, The Guardian, Wired, and more. He has appeared on This American Life, The Howard Stern Show, Penn and Teller: Bullshit!, Last Call with Carson Daly, MSNBC, and the BBC and has performed his critically-acclaimed solo comedy shows at venues around the world, including The Edinburgh Festival, Melbourne Comedy Festival, and Montreal's Just for Laughs. Leon is the producer of a recent Official Selection at the Sundance Film Festival and the host of a popular podcast: Comedy History 101. Visit him online at www.harmonleon.com.

KEITH KNIGHT is many things to many people–rapper, social activist, father, and educator among them. He's also one of the funniest and most highly regarded cartoonists in America and the creator of three popular comic strips: The Knight Life, (th)ink, and The K Chronicles. For nearly two decades, Knight, a multi-award-winning artist, has brought the funny back to the funny pages with a uniquely personal style that's a cross between Calvin & Hobbes, MAD, and underground comix. Knight is part of a generation of African-American artists who were raised on hip-hop and infuse their work with urgency, edge, humor, satire, politics, and race. His art has appeared in various publications worldwide, including the Washington Post, Daily KOS, San Francisco Chronicle, Medium.com, Ebony, ESPN the Magazine, L.A. Weekly, MAD Magazine, and the Funny Times. Find his work online at www.kchronicles.com.

“It’s hard to keep track of the sheer number of subcultures in the world today–and yet reading Tribespotting, it appears as if Harmon Leon’s infiltrated them all. This book was eye-opening to say the least, taking me to places I’d never heard of (including some I maybe wish I still hadn’t).” –David Litt, author of NY Times bestseller Thanks, Obama

“No one infiltrates better than Harmon Leon. For a three month period in the summer of 2010, I thought he was my George Foreman grill. But yes, I’ve been a fan for a long time: from Republican Like Me to Meet the Deplorables to Tribespotting. He’s the installation artist I would want to be if I didn’t spend all my time yelling. (Tough to infiltrate while yelling.)” –Lee Camp, head writer and host of Redacted Tonight

“My fave? Perhaps that anarcho-situationist rave-up SantaCon? Or the Furries? Or ... or ... Harmon Leon takes us inside some fairly troubled American Dreams.” –Anthony Haden-Guest, author of The Last Party

Tribespotting lifts the lid on the strangest and most surreal corners of the country. If you thought the U.S. was bizarre before, you haven’t seen nothing yet.” –Harriet Alexander, The Daily Telegraph