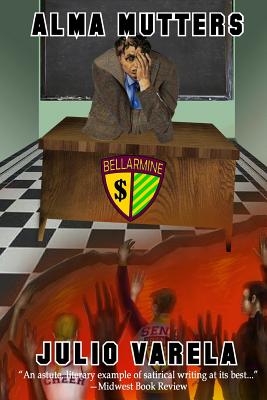 "An astute, literary example of satirical writing at its best..."
--Midwest Book Review

Xavier Mas Penoso is in over his head. He's returned to Bellarmine Jesuit Prep to teach Philosophy to the entitled teenage offspring of Miami's wealthiest families. Only, the hallowed halls of his alma mater aren't quite as gilded as when he was a student. Textbooks and notepads have been replaced with more laptops and i-Gadgets than the NSA Headquarters. The clergy running the school are P.T. Barnum's spiritual successors: media-savvy priests who know that suckers are born every minute, and that they need a top-dollar education, too. Under their tutelage, the leaders of tomorrow develop skill sets essential to careers in private and public sector corruption, depending on the boy's appetites.

Xavier soon realizes he's trapped in a job he hates. Academics has taken a distant backseat to Bellarmine's Holy Trinity: the Hype, Spectacle, and Buzz that justify its raking in tuition fees twice the size of J-Lo's biker shorts--because when you have no equal at saving the Pope's bacon, you can charge whatever you damn well please.

But Xavier is not one to give up on his principles so quickly. With empty-headed teens keyed up on Ecstasy on one hand, and a corrupt administration on the other, he plots his glorious revenge that could cost him his teaching career.

Midwest Book Review: “An astute, literary example of satirical writing at its best.” (on the Alma Mutters front cover)

Dr. Varela’s writing credits include Vortex to Virus, Myth to Meme: The Literary Evolution of Nihilism and Chaos in Modernism and Postmodernism, published in 2009 by VDM Verlag, as well as a number of book reviews for Bridges: An Interdisciplinary Journal of Theology, Philosophy, History, and Science.

He received his doctoral degree in humanities from Florida State University in 2004. Dr. Varela lives in Miami, Florida. This is his first novel.