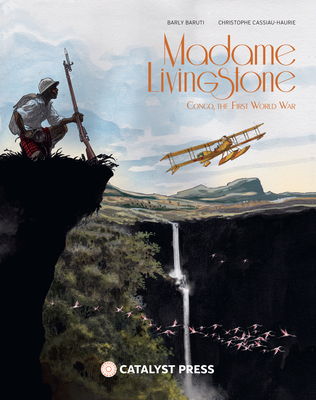 The Great War in the Congo

Madame Livingstone is based on the true story of the unlikely partnership between a Belgian and an African who were responsible for the sinking of a German battleship in the Congo during the First World War. Aviator Gaston Mercier, lieutenant in the Royal Belgian Army, arrives at Lake Tanganyika, Congo in 1915 on orders to sink a critical German warship, the Graf Von G tzen. To find out the ship's exact position, he is assigned a guide, an enigmatic, mixed-race African and the supposed son of the famous explorer David Livingstone who is nicknamed "Mrs. Livingstone" for the Scottish kilt he wears. Little by little, while the war between Belgian and German colonial powers rages on and the pair hunt down the Graf Von G tzen, the young Belgian pilot learns more about the land around him from Mrs. Livingstone and discovers the irrevocable and tragic effects of colonialism on the local people. A historical fiction story of adventure and friendship against the backdrop of World War I in Africa, Madame Livingstone was originally published in France by Gl nat in 2014. The graphic novel is authored by historian and comics specialist Christophe Cassiau-Haurie and Congo's unique beauty is presented in full color illustrations by beloved Congolese artist Barly Baruti.

Translator Ivanka Hahnenberger is a Franco-American citizen who has led an international career in business management, finance, film, television and digital production. Ivanka started her professional career as an investment-banking analyst. In 2007 she bought a brand licensing company VIP which she transformed into VIP BRANDS a comics agency, translation and consulting company. As an agency they represent world English rights for German, French and African comics publishers. As a consultancy they organize world comics events. Hahnenberger translates comics, children's books, catalogs, business proposals marketing plans and much more from French and German into English. She has translated Blue is the Warmest Colour by Julie Maroh, An Olympic Dream by Reinhard Kleist, and Catherine's War by Julia Billet, illustrated by Claire Fauvel, which was named a Batchelder Award Honor Book, amongst other books as well as Nudge theory white papers and several catalogs. She holds a Master's degree in International Development with a specialization in Intellectual Property. She has lived in over ten different cities.
Loading...
or support indie stores by buying on