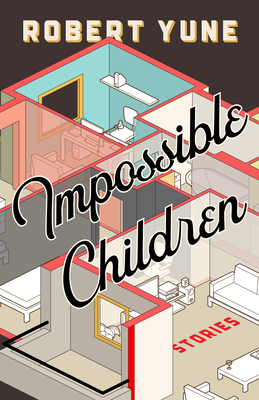 In these inventive short stories, characters must navigate an impossible world: America as we know it. Two estranged brothers on a road trip attempt to reconcile but end up at a Revolutionary War reenactment camp; a young woman moves in with her boyfriend and discovers an eerily personalized seduction manual on his bookshelf; a middle-aged Korean-American father attends college courses and is either blessed or haunted by the presence of Edward Moon, an eccentric billionaire who also happens to be "the most successful Korean in America." Playfully engaging with genres like science fiction, the fairy tale, and the Gothic tale, the interconnected short stories of Impossible Children pit tiny heroes against tiny villains; the result is a stunning mapping of geography, heritage, immigration, freedom, and the mysterious forces behind epic ruins and epic successes.

As a Navy brat, Robert Yune moved eleven times by the time he turned eighteen. In the summer of 2012, he worked as a stand-in for George Takei and as an extra in movies such as The Dark Knight Rises, Me and Earl and the Dying Girl, and Father and Daughters. His fiction has appeared in the Green Mountains Review, the Kenyon Review, and the Los Angeles Review, among other places. His novel Eighty Days of Sunlight was nominated for the 2017 International DUBLIN Literary Award; other nominees included Viet Thanh Nguyen, Margaret Atwood, and Salman Rushdie. Currently, he teaches at DePauw University, located in beautiful Greencastle, Indiana.
Loading...
or support indie stores by buying on