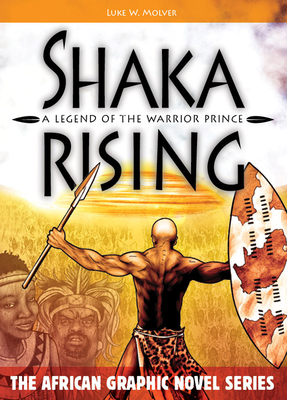 A Legend of the Warrior Prince (African Graphic Novel)

In a land beset by political turmoil and bloody conflict comes the epic saga of Shaka. Ousted by one of his chief father's jealous wives and raised in exile, his destiny is sealed through allegiance to a rival chief. Responding to threats from expanding slave trade in southern Africa, Shaka consolidates a new kingdom through warfare, mediation, and shrewd diplomacy.

A worthy introduction that offers a young Anglophone audience entry into a legend of Africa without the annoyance of overtranslation and with refreshingly three-dimensional characters. --Kirkus

Luke W. Molver, co-author and illustrator: Luke W. Molver has always known that his life would be fuelled by storytelling. He studied Fine Art and Graphic Design at the Durban University of Technology and works as a freelance illustrator and comic book creator in Cape Town, South Africa. He has produced a number of comic books and his work has been published in a variety of graphic anthologies including the Laugh It Off annual, Velocity, Mamba Comix and GrafLit: Graveyard Literature. Mason O'Connor, co-author: Mason O'Connor was born in Stutterheim in the Eastern Cape and has spent the majority of his life living in the small town of Hilton outside the capital of KwaZulu-Natal. He is currently studying mathematics at Stellenbosch University. Other works of Mason's include Late One Night, a short story published in The Natal Witness, and Guardian Angel, a short story published in Top Class English Grade 9 Reader.
Loading...
or support indie stores by buying on