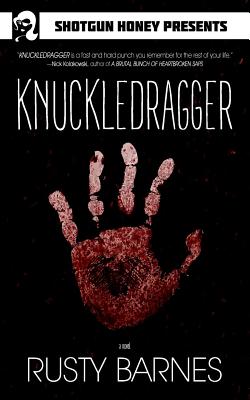 Hooligan and low-level criminal enforcer Jason "Candy" Stahl ("Irish" to his sometime girlfriend Rosario) has made a good life collecting money for his boss Otis, breaking the occasional leg or elbow, fucking Rosario, and living the life in Revere, MA. One collection trip, though, at the Diovisalvo Liquor Store, unravels events that turn Candy's life into a horror-show. In quick succession he moves up a notch in the organization, overseeing a chop shop, while he falls in lust with Otis's girlfriend Nina, gets beaten for insubordination, and is forced to run when Otis finds out about Candy and Nina's affair. Events stretch as far as Houston, Texas, where Otis and Candy have a final showdown where everything is at stake. Loser gets nothing. Praise for Knuckledragger.

Rusty Barnes, poet and crime writer, grew up in rural northern Appalachia. He received his B.A. from Mansfield University of Pennsylvania and his M.F.A. from Emerson College. His fiction, poetry and non-fiction have appeared in over two hundred fifty journals and anthologies. Sunnyoutside Press published two collections of his fiction, Breaking it Down and Mostly Redneck, as well as a novel, Reckoning. His eighth and most recent book is Ridgerunner. Forthcoming books include a sequel to Ridgerunner titled The Last Danger; a linked story collection titled Kraj: The Enforcer; and a novella titled Sunset Approaching. He edits a blogazine of crime stories and occasional reviews called TOUGH.
Loading...
or support indie stores by buying on