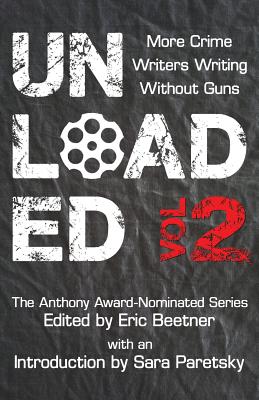 The Anthony-nominated collection of crime stories without guns--the collection we didn't want to be necessary--is back for Volume 2.

Two dozen more crime writers have come together to raise their voices and take pen in hand to call for a sensible and reasoned debate about guns in America. As the mass shootings continue, the avoidable accidents, the suicides, the gun violence that consumes our country rolls on unabated and unaddressed by our leadership other than to say, "Now is not the time to discuss it," these crime writers have chosen to start the dialogue.

In stories of crime, mystery and suspense these authors have left the guns out to show for a short while that we can do without them and the plot doesn't fall apart. Maybe, in a small way, we can show that the American way of life doesn't cease to be, either.

Not anti-gun, Unloaded Volume 2 is pro-reason. These authors comprise gun owners and non-owners, voters on both sides of the political aisle. The cause that unites us all is the desire to see the senseless killing stop and to be able to have the discussion without the divisive language, vitriol and name calling that too often accompanies this debate.

The top priority in these stories is to entertain with thrilling action and suspense that readers know and love about a crime story. To do so without guns leads to some creative leaps from writers who spin tales of simians on the loose, androids with buried secrets, punk rock shows and tattoo shops.

Bestselling authors like Chris Holm, Lori Rader-Day, Bill Crider, Laura McHugh, James Ziskin and John Rector along with many more join together to call for an end to the needless violence and a start to a reasoned debate. With a forward by legendary Sara Paretsky, Unloaded Volume 2 is a book we wish wasn't needed. But staying silent is no longer an option.

" A collection of] entertaining and often thought-provoking stories." --Publishers Weekly