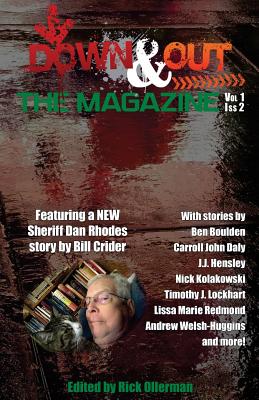 Picking up from where our last issue left off, we have another group of crime stories written especially for us. Starting with ex-police detective Lissa Marie Redmond whose short fiction has appeared in anthologies like Akashic's Buffalo Noir and whose debut novel will be out in February 2018, we move along to novelist Andrew Welsh-Huggins, author of the Andy Hayes PI series. Then we have a chilling new tale by short story specialist Nick Kolakowsi, followed by this issue's featured writer, Bill Crider, who takes us to Blacklin County, Texas, where he treats us to a new story starring everyone's favorite sheriff, Dan Rhodes. Tim Lockhart's debut novel came out earlier this year amidst a lot of buzz and he's here with a very dark tale indeed. Next we offer a taste of J.J. Hensley's fast-paced writing with an airborne story as we await the premiere of a new series early next year. Our trip to the past brings us to the legendary writer Carroll John Daly and his no-holds-barred character Race Williams, who never shot any man that didn't deserve it. We close out the issue with a story strong with irony by Ben Boulden. Throw in a terrific column by J. Kingston Pierce and you've got another issue of Down & Out: The Magazine.