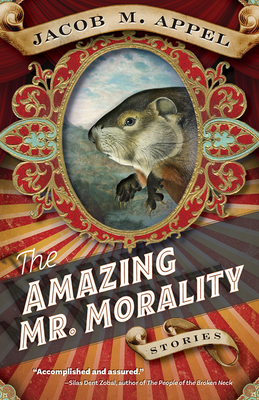 Eric Hoffer Award, 1st Runner-Up, Short Story/Anthology category
The Amazing Mr. Morality features tenacious men and women whose determination to buck middle-class social convention draws them toward unforeseen challenges. A failed television producer insists upon having a woodchuck relocated from his lawn, only to receive desperate letters in which the woodchuck begs to return. An overconfident ne’er-do-well obtains a lucrative lecture invitation intended for a renowned ornithologist and decides to deliver the speech himself. An innocuous dispute over whether to rename a local street opens up racial fault lines that prove deadly.
The collection concludes with the title novella in which two unscrupulous ethicists, writing rival newspaper columns, seek to unseat each other by addressing questions such as: If you’re going to commit a murder, is it worse to kill when the victim is sleeping or awake?

"Every single story in The Amazing Mr. Morality contains a nugget of insight into modern life, and some facet of each story’s ending—be it an unexpected twist or a good ironic joke—lingers in the memory long after reading."
Foreword Reviews


"The Amazing Mr. Morality so delectable is that these characters rarely make the "right" choice. The stories collected here aren't morality plays, with Appel serving judgment on his character's actions through the resolutions to his tales (though a couple of them might get served with poetic justice). Instead, the author is interested in watching the ripple effects of when everyday people break bad: What are the unforeseen consequences for the health of a community when one person decides to stray from the common good?"
—Shelf Awareness


“Accomplished and assured.”
—Silas Dent Zobal, author of The People of the Broken Neck

“The characters in The Amazing Mr. Morality sing like so many sirens, wailing their desires, plotting, misguiding, and deceiving for causes noble and base. With wit and tenderness, Jacob Appel’s stories illuminate the awkward truths of what it means to be human.”
—Tyrone Jaeger, author of So Many True Believers

“In this collection of disturbing, addictive, provocative stories, the situations bristle with the reach of unrepentant longing and unexpected persistence. Appel’s stories never fail to impress; they never fail, period.”
—Karen Heuler, author of The Inner City and In Search of Lost Time

Jacob M. Appel is a physician, attorney, and bioethicist in New York City, where he teaches at the Mount Sinai School of Medicine. His publications include four novels and seven collections of short fiction. He is the winner of numerous awards, including the Hudson Prize, the Dundee International Book Prize, the Robert Watson Literary Prize, and the Devil’s Kitchen Reading Award. Learn more at jacobmappel.com.
Loading...
or support indie stores by buying on