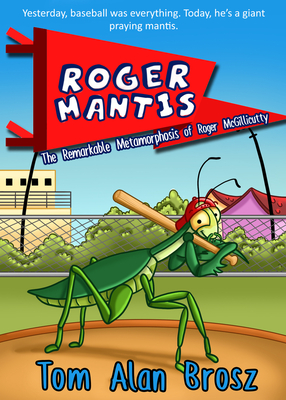 The Remarkable Metamorphosis of Roger McGillicutty

Baseball is Roger McGillicutty’s whole life. That is until he wakes one Saturday to find he is no longer a normal eleven-year-old boy. He's a five-foot-tall praying mantis.

Roger has school on Monday, the carnival comes to town next week, and his baseball team is poised to play their biggest rival in one week. Being a giant bug will seriously cramp Roger’s style!

To Roger’s surprise, his parents and friends are supportive. Even his dog isn’t much spooked. But not everyone’s thrilled about Roger’s change. Some people are frightened and others would like nothing more than to squash him into the ground like the bug he is.

And when Little League officials oust Roger from baseball, his world collapses.

When a reporter from the city comes snooping around rumors of a man-sized baseball-playing praying mantis, Roger must choose between hiding his true self or being the hero he's always wanted to be.

Tom Alan Brosz is an actual rocket scientist (sort of), having done design and engineering work in the private space industry back before the private space industry was cool. His qualifications for writing this book are that he has experience in raising children who like bugs and raising pet mantises for those children. Normal-sized mantises, of course. He lives in the San Francisco Bay area.
Loading...
or support indie stores by buying on