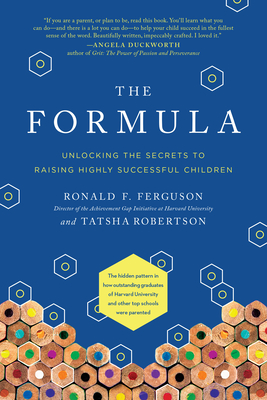 We all want our children to reach their fullest potential—to be smart and well adjusted, and to make a difference in the world. We wonder why, for some people, success seems to come so naturally.

Could the secret be how they were parented?

This book unveils how parenting helped shape some of the most fascinating people you will ever encounter, by doing things that almost any parent can do. You don't have to be wealthy or influential to ensure your child reaches their greatest potential. What you do need is commitment—and the strategies outlined in this book.

In The Formula: Unlocking the Secrets to Raising Highly Successful Children, Harvard economist Ronald Ferguson, named in a New York Times profile as the foremost expert on the US educational "achievement gap," along with award-winning journalist Tatsha Robertson, reveal an intriguing blueprint for helping children from all types of backgrounds become successful adults.

Informed by hundreds of interviews, the book includes never-before-published <wbr />insights from the "How I was Parented Project" at Harvard University, which draws on the varying life experiences of 120 Harvard students. Ferguson and Robertson have isolated a pattern with eight roles of the "Master Parent" that make up the Formula: the Early Learning Partner, the Flight Engineer, the Fixer, the Revealer, the Philosopher, the Model, the Negotiator, and the GPS Navigational Voice.

The Formula combines the latest scientific research on child development, learning, and brain growth and illustrates with life stories of extraordinary individuals—from the Harvard-educated Ghanian entrepreneur who, as the young child of a rural doctor, was welcomed in his father's secretive late-night political meetings; to the nation's youngest state-wide elected official, whose hardworking father taught him math and science during grueling days on the family farm in Kentucky; to the DREAMer immigration lawyer whose low-wage mother pawned her wedding ring to buy her academically outstanding child a special flute.

The Formula reveals strategies on how you—regardless of race, class, or background—can help your children become the best they can be and shows ways to maximize their chances for happy and purposeful lives.

Praise For The Formula: Unlocking the Secrets to Raising Highly Successful Children…

"If you are a parent or plan to be, read this book. You'll learn what you can do—and there is a lot you can do—to help your child succeed in the fullest sense of the word. Beautifully written, impeccably crafted. I loved it."
—Angela Duckworth</strong

"The Formula is for all parents who want to be powerful advocates and strategic partners for their kids. Refreshingly practical, it unpacks what parents of high-achieving adults did to help their children be successful and happy. I recognize so many of these traits in my wonderful parents."

"With over 40 years of education experience, I have learned that a child's success isn't solely dependent on grades or standardized tests. Success, starts first and foremost at home, with parents that support an intrinsic motivation for their children to reach their fullest potential. However, just as children have different learning styles, parents, as well, have different parenting styles. The Formula masterfully combines the latest research with compelling, real-life stories and introduces us to different parenting styles and provides a formula for teaching, motivating, and empowering successful children."

The Formula pursues an important question that social scientists, preoccupied with explaining the problematic outcomes of childhood, seldom address: the role parents play in developing children—regardless of their race, class, or national origin—who become extraordinarily successful in life. Ferguson and Robertson's compelling analysis of data collected on the life stories of interesting people who change the world is a must-read."

Ronald F. Ferguson, PhD, joined the faculty at Harvard's John F. Kennedy School of Government in 1983 and has spent his entire career there using teaching, research and writing to increase the flow of knowledge between the university and the world. An MIT-trained economist who focuses social science research on economic, social, and educational challenges, he co-founded Tripod Education Partners in 2014 and shifted into an adjunct role at the University, where he remains a fellow at the Malcolm Wiener Center for Social Policy and faculty director of the university-wide Achievement Gap Initiative (AGI). A February 2011 profile of Ron in the New York Times wrote, "There is no one in America who knows more about the gap that Ronald Ferguson." Ron's current focus as AGI director is an initiative titled the Boston Basics. Inspired by the fact that birth-to-three is a critically important period for learning, the Basics Campaign is striving to saturate the entire community with advice and support for the parents of infants and toddlers. Ron holds an undergraduate degree from Cornell University and a PhD from MIT, both in economics. He has been happily married for 38 years and is the father of two adult sons.

Tatsha Robertson, MA, is an award-winning editor and writer with more than 20 years of experience handling investigative, feature, and news stories for leading magazines and newspapers. As the first female New York City Bureau Chief and National Rover for the Boston Globe, she began studying how parents raise successful children some ten years ago. She pioneered Essence magazine's focus on investigative and news articles, which led to the positioning of the magazine as a significant authority and voice on news and led to an interview with President Obama on parenting. Most recently, she was a senior editor at People, where she focused on crime stories. She has been an adjunct professor of journalism at New York University since 2005. Ms. Robertson has been a frequent guest on national media, appearing on programs like TODAY and for television networks that include CNN, HLN, FOX, and MSNBC. A prolific writer, Robertson recently co-authored Media Circus with Kim Goldman. She is also completing a thriller. Born in Boston, Massachusetts, she grew up in Greenville, South Carolina, and earned a bachelor's degree at Morris College and a master's degree in journalism at The Ohio State University.
Loading...
or support indie stores by buying on