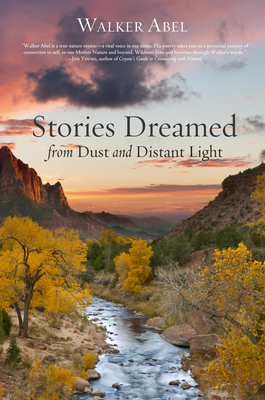 In his second collection, Walker Abel continues to voice the archetypal and contemplative presences awaiting us within the natural world. These are poems of surprise, poems of revelation. Not quite fairy tale, not quite magical realism, the poems are stories out of the unconscious, which is to say, out of the wild. For Abel, the poem is a threshold. It leads into another realm that is both the familiar grounded world of mountains and rivers, and also an ineffable world, where we meet our own yearnings for open-hearted encounter with the fullness and mystery of earthy life.

Walker Abel lives in a remote home in the Yolla Bolly Mountains of northern California. As an undergraduate at University of California, Santa Cruz, in the mid-70’s, he participated in an environmental studies field program called Sierra Institute. Twelve years later, after completing a graduate program with ecopsychology pioneer Robert Greenway, he came back to teach for Sierra Institute, which he has done now for 26 years, while also taking on the role of director since 2003. Most of his poetry has been written in field journals while out on these academic programs, which are 9 weeks long and are entirely taught during a series of backpacking trips. It has not been unusual for Walker to teach three programs a year, amounting to a total of up to 6 months in the backcountry. One of his greatest joys is watching each new group of students open over time to the transformative influence of wilderness immersion. Walker has a 33 year old son (Stuart), who is also an ecopsychologist, backpacker, and nature-connection educator.