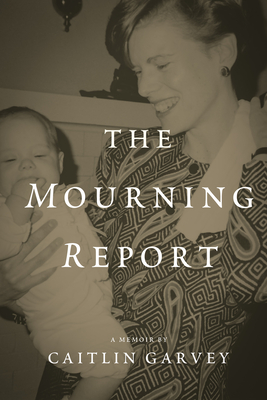 Two years after her mother's death from breast cancer, Caitlin, then 20 years old, was admitted to a psychiatric facility after a suicide attempt. There, a therapist diagnosed her with major depression and anxiety, and she spent time as an inpatient. Years later, still suffering from grief and depression, Caitlin decided to embark on a "grief journey," interviewing the people involved in her mother's dying process: a hospice nurse, a priest, an estate planner, a hairstylist, and a funeral director. If she figured out how they could function after being so close to her mother's death, then maybe she could learn how to navigate her own life. Each chapter of The Mourning Report is centered on each interview and the memories, anxieties, and reflections that it stimulated.

Caitlin Garvey is a Chicago-based writer and English professor. She has an MFA from Northwestern University and an MA in English Literature from DePaul University. Her nonfiction has been nominated for multiple awards, including The Pushcart Prize and Best of the Net, and has appeared in The Baltimore Review, Post Road Magazine, The Tishman Review, Little Fiction: Big Truths, Matter Press, Ragazine, JuxtaProse, among others.
Loading...
or support indie stores by buying on