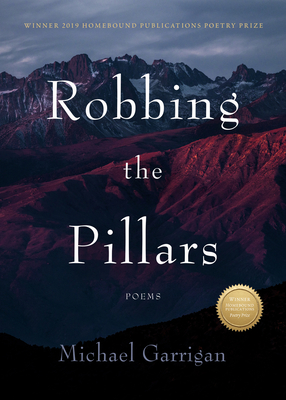 The headwaters of Robbing the Pillars begin deep in the anthracite country of Pennsylvania and wind their way through mountain tributaries before reaching the Susquehanna River. These poems venture out west through smeared Nebraskan skies, up wild Washington waters, and into the Siskiyou Mountains as meteors split the sky on fire. They traverse the wet woods of Maine along the West Branch of the Penobscot River to the peak of Katahdin. They hike the Appalachian, Continental Divide, and Pacific Crest Trails. In the early coal mines of Pennsylvania, miners crawled into the deepest parts of the mines, set dynamite, and blew joists holding up walls in hopes of getting the last valuable rock before the mountain collapsed -- robbing the pillars. The poems in Robbing the Pillars are the dynamite, the pillars, the rock, the mountain, and the miners. They embrace terrains familiar and forgotten -- those which have been stripped and left to become wild again. They explore the physical (geological, riverine), familial, personal, and cultural landscapes of our world as we rob its pillars.

Michael Garrigan writes and teaches along the banks of the Susquehanna River in Pennsylvania. He enjoys exploring the river’s many tributaries with a fly rod and exploring the riverlands with his wife and dog. His summers are spent in search of wild trout in wild places. He loves watching water move over rocks and feels strongly that every watershed should have a Poet Laureate. Michael holds a BA in Creative Writing from the University of Pittsburgh and an MA in English & Creative Writing from Southern New Hampshire University. He is the author of the chapbook What I Know [How to Do] (Finishing Line Press) and his essays and poetry have appeared in Gray’s Sporting Journal, The Wayfarer, The Drake Magazine, Hawk & Handsaw, Permafrost, Sky Island Journal, Split Rock Review, and other magazines and anthologies. You can find more of his writing at www.mgarrigan.com.

Praise For Robbing the Pillars: Poems…

"Wandering where fish and memory and his feet will take him, Michael Garrigan proclaims that the land “isn’t ours to write, but to read.” Here’s a poet who reads the land well, with deep attention and devotion, who, if you take care to enter his poems, will show you remote creeks and the undercut banks where trout wait, who will help you hear elk crossing a river at dusk and chant the names of rocks, who will sing lamentations for what we’ve done to the rivers that run through this precious earth and still have faith enough to praise what persists." —Todd Davis, author of Native Species and Winterkill

"Garrigan’s fine collection professes, articulates, and, most importantly, enacts a profound affection for the natural world and our non-human neighbors. The contact here is direct, and the engagement with the terrestrial earth, that invaluable text, is authentic. These are poems capable of enhancing, deepening, our days astream and afield — a rare feat, indeed." —Chris Dombrowski, author of Body of Water

"In poems both visceral and spiritual, local and cosmic, Robbing the Pillars immerses us in the darkness and the light of our modern world. At its heart is a stubbornly-alive Pennsylvania wilderness, where the water is orange, the resources are brutally extracted, and yet “brown trout / build redds in Dunkin Donuts coffee cups.” It’s the 21st century and the natural world is in total collapse—for a poet to elegize would be enough, but Michael Garrigan goes further, taking us to a place where wind “shreds linen into lichen,” re-wilding our spirits. Robbing the Pillars dares to celebrate, to pay reverence, and never stops seeking the next “deep hole at the bend / that looks to hold trout." —Anders Carlson-Wee, author of The Low Passions

"There is a resonance to Michael Garrigan's Robbing the Pillars that is as much dynamite as it is water slipping over stones. A resonance that calls us again and again to a river that has led a hard living, but with each new rain becomes cleansed. You cannot enter this collection without learning about devotion and perseverance. You cannot leave this collection without it resonating in your bones." —Cameron Scott, author of The Book of Cold Mountain

"In Robbing the Pillars, Michael Garrigan takes us on a pilgrimage across the rugged terrain of the Siskiyou Mountains in California through the forests of northern Pennsylvania to the highest peak of Katahdin in Maine, all the while passing along his knowledge of survival. Part poetry and part guidebook to the wilderness, this collection provides us a rewarding consideration of place. Blending naturalistic observation, acute description, and a poet’s lyricism, Robbing the Pillars is bountiful and diverse as the habitats on Earth." —Crystal S. Gibbins, author of Now/Here and editor of Split Rock Review

"Michael Garrigan’s poems, whether about clearing a trail or a Bob Dylan song, continually bring us back to the ways in which the moments we experience in this amazing world are the results of seven takes in a studio, of eons that made the “broad shoulders of schist and saprolite,” and how the shad at the end of the poet’s sharply perceptive line ran a thousand miles to arrive there, weighing “three pounds / heavy with muscle, forked tail rudder, enough to finish out its journey.” These poems, too, are heavy with muscle, and have come a long way to show us where we are." —Christian Barter, author of Bye-Bye Land

"Robbing the Pillars offers poems from Pennsylvania coal mine to Maine mountains, from the Hoh Rainforest to Joshua Tree National Park, poems infused with the natural and unnatural world, as if the poems themselves are aspens or Doubletop Mountain or the trail tools Garrigan once lugged through the wildernesses of his lives, rather than words etched on paper. Garrigan writes that the natural world “isn’t ours to write, but to read,” yet Garrigan does exactly what he beseeches us not to do; he writes the land, and beautifully. Later, he tells us that this world “was called / many things in the languages of animals and rock.” Then Garrigan translates those "many things" into beautiful poems that ring like rock struck. Nearing the end of Robbing the Pillars, he writes, “This is where we are.” And, yes, this is where we readers are, right here, in the middle of his rivers of poems. “There. That’s where I want to go,” he writes, and we the readers understand. We, too, want to go right there, into his poems, within, and out into, his world of words." —Sean Prentiss, author of Crosscut and Finding Abbey
or
Pre-Order Now
Copyright © 2020 American Booksellers Association