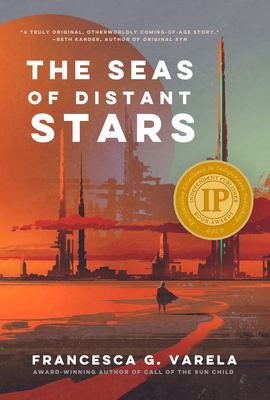 The Seas of Distant Stars

Agapanthus was kidnapped when she was only two years old, but she doesn’t remember it. In fact, she doesn’t remember her home planet at all. All she knows is Deeyae, the land of two suns; the land of great, red waters. Her foster-family cares for her, and at first that’s enough. But, as she grows older, Agapanthus is bothered by the differences between them. As an Exchanger, she’s frail and tall, not short and strong. And, even though she was raised Deeyan, she certainly isn’t treated like one. One day, an Exchanger boy completes the Deeyan rite-of-passage, and Agapanthus is inspired to try the same. But, when she teams up with him, her quest to become Deeyan transforms into her quest to find the truth—of who she is, and of which star she belongs to.

Francesca G. Varela was raised in Oregon’s Willamette Valley. Her dream of becoming an author began in third grade, and her writing career had an early start; she had a poem published in the 2002 edition of The Anthology of Poetry by Young Americans. Her debut novel, Call of the Sun Child, won the Bronze Medal in the 2014 Moonbeam Children’s Book Awards for Best First Book and also was named a Finalist in the 2015 Next Generation Indie Book Awards in the Young Adult category. She recently graduated from the University of Oregon with degrees in Environmental Studies and Creative Writing. When not writing, she spends her time practicing piano and violin, figure skating, walking her dog, Ginger, and exploring Oregon’s wild places.